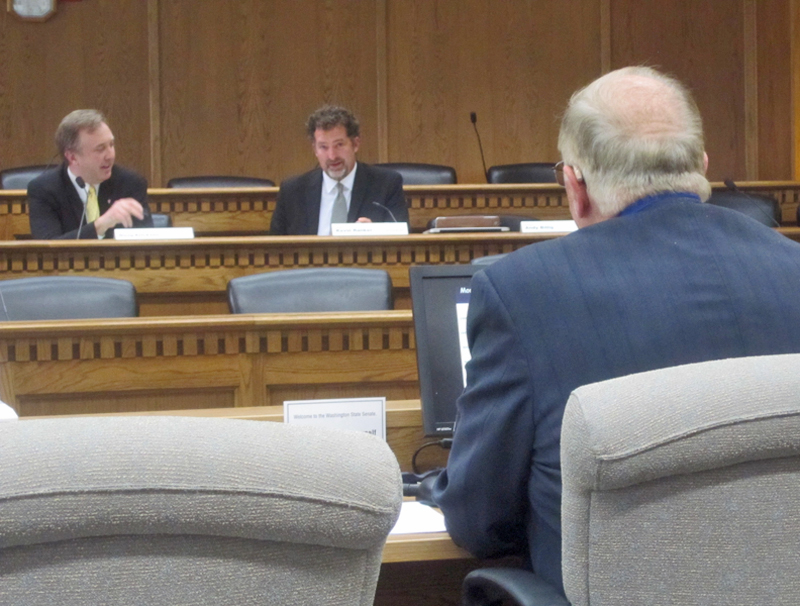 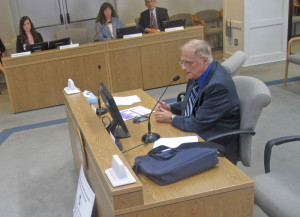 OLYMPIA, March 27.—A retired Western Washington University professor and longtime critic of global-warming theories told a Senate panel Tuesday that the case for a greenhouse-gas crackdown seems to have more to do with faith than science. And talk about contrarian views: He says the world is actually getting colder.

“Don’t believe what I say,” said Don Easterbrook, professor emeritus of geology at Western Washington University. “Look at the data. You can arrive at your own conclusions, because data speaks way louder than opinions.”

There were plenty of ways to read Easterbrook’s lengthy presentation to the Senate Energy, Environment and Telecommunications Committee. On the surface it was a challenge to the now-orthodox scientific view that man’s production of carbon dioxide is causing earth’s temperature to rise. But by scheduling the hearing you might also say Chairman Doug Ericksen was sending a political telegram to Gov. Jay Inslee. The “greenest governor” begged the Legislature for a bill this year establishing a global-warming task force, which will consider policies aimed at reducing greehouse gases. The measure passed the Senate March 13 after changes demanded by the skeptical Ericksen, and following House approval Monday it goes to the governor’s desk. The important thing: Language was eliminated that drew conclusions about global warming — even that it is taking place.

“You can’t be scared of viewpoints that may or may not be in agreement with the governor,” said Ericksen, R-Ferndale, who became chairman of the committee this year in the upheaval that brought the Senate’s Republican-leaning Majority Coalition Caucus to power. “I think Dr. Easterbrook brought up some information that we need to consider that isn’t always brought forward in Olympia. And I can guarantee you that over the last eight years, that hearing could never have taken place.”

Talking Up a Storm 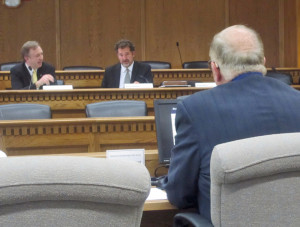 This week’s action on climate change comes while the Legislature takes something of a breather. During the session’s first two months, lawmakers held hearings and passed bills at a breakneck pace. But the rush is over — a deadline for the passage of policy bills from their houses of origin came two weeks ago. Lawmakers are awaiting the release of a budget proposal in the Senate that will launch the central debate of the session. So for now, while there aren’t any more pressing matters, you might say they are trying to decide whether they want to disprove Mark Twain, who once remarked that everyone seems to talk about the weather but no one ever does anything about it. So far the Legislature has managed to prove the first point correct.

In his hour-and-a-half presentation to the committee, Easterbrook challenged the idea that any legislation can make a difference where global warming is concerned. In the past, when warming has occurred, it has been due to natural causes, he said. Only since 1945 has man produced enough carbon dioxide to have a measurable effect, and even that is likely too low to make any any difference. But no connection between man-caused emissions of carbon dioxide and temperature increases can be proven, and if there is any relationship between carbon dioxide and warming, it is just as likely to be the other way around. Warming may cause the release of carbon dioxide from the oceans.

Is the earth heating up? Nope, he said, and claims that the last decade is the hottest on record are simply untrue. In fact, while the scientific community will agree that there was a warming trend between 1978 and 1998, he said the globe has been on a cooling trend for the last 15 years.

You have a choice, he said — you can believe computer models or you can believe actual measurements. Over the last 15 years ground measurements show cooling of about four degrees during winter months, in line with historic natural variations in temperature. Currently Europe is experiencing the coldest winter in a century, he said – a point that doesn’t seem to get much news media attention on this side of the pond. “All the while this is going on we see the headlines that global warming is accelerating and it is getting hotter and hotter, and in fact it is getting cooler and cooler.”

One by one, Easterbrook challenged the contentions that show up every day in news media reports. The polar ice caps aren’t melting, he said. In fact, the Antarctic ice sheet is growing, reports of ice-shelf breakup to the contrary. “You would have to heat Antarctica 100 degrees to melt the Antarctic ice,” he said. “How likely do you think that is?” The fact that the ice sheet has remained intact for the last 50 million years ought to tell you something, he said.

As for the northern ice cap – he pointed out that there isn’t one, and never has been. The North Pole is crusted with several feet of sea ice that comes and goes; as recently as the 1400s there have been records of clear sailing across the Arctic Ocean. And the plight of the polar bear doesn’t seem so awful. “What I can tell you is that the polar bear population has gone from 5,000 to 25,000 during the same period, when the sea ice was mostly melting, and they survived 10,000 years of climate warmer than today, so they’re going to be just fine.”

How about sea level? Is it really going up? Apparently yes, Easterbrook said, but not at the rates some estimate, and certainly won’t hit the 20 feet that some suggest. Easterbrook said sea level currently is increasing at a rate of about seven inches a century, consistent with natural fluctuations during periods of warming and cooling prior to the mid-20th century. Interestingly, he said sea level fluctuations appear to be different in different places, higher for instance in the Puget Sound area than off the coast of Oregon. But certainly a matter of inches, not feet.

Oceans also do not appear to acidifying, he said – the pH balance worldwide remains steady, though there may be some areas like the Puget Sound where the balance may be changing due to factors other than carbon dioxide.

The idea that global warming is occurring seems so ingrained that many prominent scientific journals reject articles that challenge the notion, as a matter of editorial policy, he said. And a sort of conventional wisdom has swept the news media as well — though he points to a petition signed by 30,000 scientists as an indication that there is a divided view. It has become so easy these days to blame everything on global warming that an alternate view comes as a shock, he said. Take the idea that every extreme weather event is now blamed on global warming — even though extreme weather events have been taking place since the beginning of time. “Severe storms are not more frequent than normal. When we get a big snow storm, people always say it is about global warming. When we hear about a hurricane on the East Coast people say it is because of global warming. It isn’t.”

And there are skeptics on the other side as well. If Easterbrook and other climate-change critics are right, why on earth would the scientific community suppress them> That’s what Democrats Andy Billig and Kevin Ranker wanted to know. Billig, D-Spokane, said he was unimpressed. “It seems that the basis of his claim is that NASA is manipulating its data, and if I had to choose between the word of one professor from Western Washington or NASA, I would go with NASA.”

Ranker, D-Orcas Island, the Senate Democrats’ environmental lead, said he was discouraged to see that anyone wants to debate the case at this point. “Fifteen years ago you could have had a debate about whether we were having warmer days, more extreme weather, or a sea level rise,” he said. “All of these things appear to be what the peer-reviewed data suggest is occurring because of climate change. We shouldn’t be debating whether climate change is real, but rather what we ought to be doing about it.”