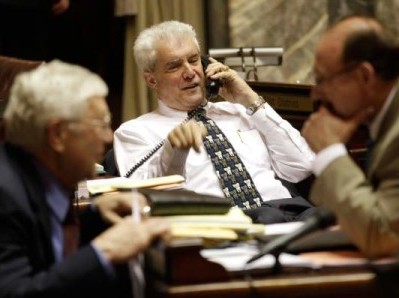 Carrell’s Death Leaves Senate in a Tie and Could Turn Chamber Upside Down, All Over Again

Next Move is Up to Senate Dems; Lt. Gov. Owen, a Democrat, Would Cast Tie-Breaking Vote – House’s O’Ban Among Contenders for Appointment 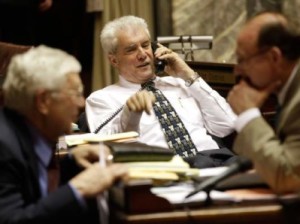 The death of state Sen. Mike Carrell has thrown the Senate for a loop.

OLYMPIA, May 30.—The death of longtime lawmaker Mike Carrell Wednesday has thrown the Washington state Senate for a loop, not just because it has lost one of its best-respected members, but because it could turn the chamber upside down, all over again.

Suddenly the opposing forces are in a tie. The Republican-leaning Majority Coalition Caucus, which had a bare one-vote advantage, now has 24 votes. The Senate Democratic Caucus also has 24 votes. And if at any point a bill comes down to a 24-24 vote, Lt. Gov. Brad Owen casts the tie-breaker. He’s a Democrat.

So for the next few days, possibly a week, possibly longer, until a replacement can be named for Carrell, it has become at least technically possible for Democrats to retake control of the Legislature’s upper chamber. That has implications far beyond the Capitol. Democrats already control the House and the governor’s mansion, and if they move fast enough and work as a team, they could pass a budget and every other piece of legislation favored by the party, adjourn the current special session in a flash and go home. And while swift motion and teamwork may be a bit much to expect from the Washington Legislature, it is exactly what polished off the Democrats in the Senate this year when the coalition of 23 Republicans and two Democrats took power. The prospect of payback has Republicans worried – and they are scrambling to complete the appointment process as quickly as they can.

“You’re talking about chaos on the political front, total chaos,” says Kirby Wilbur, chairman of the state Republican Party. For one thing, there is the possibility of a lawsuit that could leave the state without a budget — something that has never happened before.

Democrats aren’t saying anything about their plans, aside from a strikingly non-committal statement from Democratic Leader Ed Murray, D-Seattle. It should be noted that during Carrell’s frequent absences for medical treatment this session, state Sen. Jim Hargrove, D-Hoquiam, offered to vote in his stead should a tie occur. That courtesy might make it seem a bit far-fetched that the Democrats would take advantage of the death of a member to regain power. Yet there was plenty of righteous indignation from Democrats a few months ago when their caucus was sidelined, there were many who said the takeover was stinky in the first place, and frustration has been mounting with the apparent lack of progress in budget negotiations. However such a tactic might look to the outside world, voters would have plenty of time to forget about it before the next election, a year and a half from now. Wilbur says he wants someone, somewhere in the Legislature, to assure him it won’t happen. 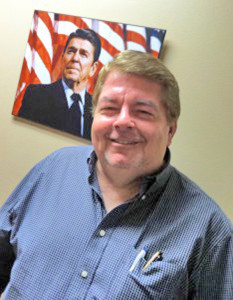 Here’s the nightmare that was keeping him up last night. “This is hypothetical. I don’t know when the service for Mike might be, but it might be Saturday. On Monday they could come into session and decide the appropriate time has passed for grief and mourning. The House comes into session and passes a budget and sends it to the Senate. The Senate comes into session, and assuming everybody is there on short notice, there is a 24-24 vote. It goes to Brad Owen. Brad Owen votes yes and breaks the tie. It goes to the governor’s desk and it is signed.

“It could all be over in three hours.

“Chaos reigns, I guess this is what it comes down to. If we had a 10-vote margin or the Democrats had a 10-vote margin, I don’t think it would be an issue, but this is the one vote on which a budget could be accepted or rejected, upon which the legislative session continues or ends. And again, people say, the Democrats wouldn’t do that, but my point is that a year and a half from now, no one would remember.”

Republicans in a Scramble

Republicans right now are in a scramble to appoint a replacement for Carrell, but it is a tricky process that normally takes weeks and technically could take as long as midsummer. Precinct committee officers from Tacoma’s 28th Legislative District will meet tonight at 6:00 at Pierce County Republican headquarters to begin the process of naming three candidates for the position. Names now floating about include former Pierce County Councilman Dick Muri, state Rep. Steve O’Ban, R-University Place, University Place Councilman Javier Figueroa, and Caleb Heimlich, executive director of the state Republican Party.

The names ultimately will be forwarded to the Pierce County Council, which must make a decision within 60 days of the vacancy. That means it faces a deadline July 27 – long after the current legislative session is done.

There is really no reason to expect it to take that long. Longtime observers can remember times when legislative appointments have been made within two days. And because there is a Republican majority on the Pierce County Council, 5-2, and the council may see no political advantage in delay. But there are inevitable problems with getting a quorum of precinct committee officers together and deciding on election processes, and Wilbur says he expects the process to take at least a week.

“There are endless possibilities here. I am hoping that what happens is that Sen. Hargrove or Lt. Gov. Owen would say no games, because the reason we are expediting this process is because of concern about what the Democrats might do with the majority.”

What Would Democrats Do? 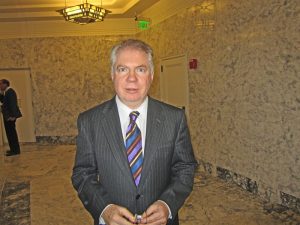 For now, the Senate Dems are standing by the statement issued by Democratic Leader Ed Murray Wednesday, which didn’t quite address the question. Murray, D-Seattle, said now isn’t the time to talk of such things. “Respectfully, our thoughts are with Mike’s family and not on any implications his passing may have on the Senate,” he said. “Today the Senate lost one of its own. Mike Carrell will be missed.”

Lt. Gov. Owen says a 24-24 tie is conceivable given the current dynamics and the makeup of the Senate.  And if it happens, he says he will cast that tie-breaking vote. “From the standpoint of policy and the standpoint of the way things should operate over here, I hope it doesn’t come down to a tie vote. I believe strongly that they should be able to come to an agreement, both sides should be willing to compromise in order to get the job done, recognizing the diversity of philosophy and people. I hope it doesn’t come up, but I am perfectly happy and content with my position of providing a vote if necessary.” 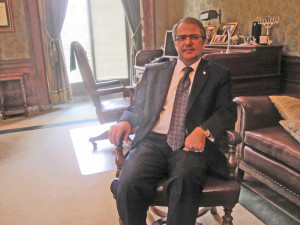 There is some question about Owen’s legal authority to cast that tie-breaking vote to pass a bill – the linch-pin in Wilbur’s total-chaos scenario – and that makes it all the more spooky. Because it means that if Owen provides the deciding vote on a budget bill, the whole thing could be tossed out. If that were to happen after July 1, it would leave the state without a budget, and the world of state government might come to an end.

It has to do with the duties of the lieutenant governor that are spelled out in the state constitution. The lieutenant governor is the presiding officer in the Senate and is allowed to cast a vote when votes are tied. Owen maintains the constitution requires him to do so, and so he does. But most votes that take place in the Senate have nothing to do with the passage of a bill – they deal with procedural motions or amendments. There is no question about Owen’s ability to cast votes there. Final passage is a different matter, and a tie is so rare that the whole question appears to be unexplored legal territory.

The problem is that a different section of the constitution sets the requirement for the number of votes required to pass a bill. It says that “a majority of the members elected to each house” must cast votes in favor of a bill in order for it to be considered passed. There are 49 members elected to the Senate, and so 25 votes are sufficient to pass a bill. But if the presiding officer joins in the voting, the body has 50 members, and 25 votes do not represent a majority. So Owen’s vote couldn’t break a tie.

The Senate rules used to make things easy. They say the lieutenant governor can’t break a tie on final passage of a bill, and Owen says he knows of no case where a lieutenant governor cast a vote on final passage – until he did, in 2009. On a bill that gave local governments more authority to spend tax money, Owen cast a tiebreaking vote and the late Sen. Carrell rose to challenge him. So Owen issued a ruling that said the state constitution supersedes the Senate rules. Therefore he was allowed to cast a tiebreaking vote on final passage, and that his vote created a sufficient majority to pass a bill. Owen’s vote was not challenged in court.

Allen Hayward, the House Republican counsel who retired this year after a more-than-30-year tenure, says he believes Owen’s ruling was incorrect. “I’m fairly convinced that his ruling that he could vote was fine, but he was wrong to conclude that his vote resulted in passage. If 25 is a majority of 50, well, I think that proves the need for more money for funding education.”

And if such a thing happens while the Republicans race to replace Carrell, Wilbur said the GOP will be quick to join any legal challenge that is filed.