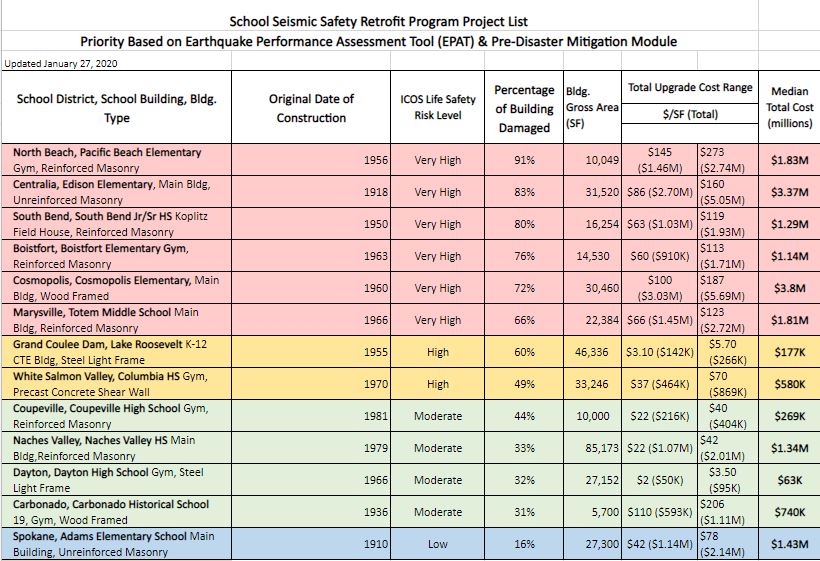 In June, the state Department of Natural Resources released a report which found that of the 561 school buildings examined across the state, 63% were high or very high priority for seismic retrofits. These schools pose a significant risk of collapse or trapping students and staff if they collapse due to an earthquake. The median building is expected to be 55% damaged, and a majority of the buildings will be unsafe to occupy.

Former Rep. Jim Buck (R-24th LD), spent more than $800 in postage sending copies of the report to nearly 2,400 school principals. In a letter to the Wire, he stated the following, which was written in August after the most recent seismic study was released:

“Washington’s seismic safety efforts are way behind the rest of the west coast. The state has known about the risk for years…our schools can’t wait for more studies, procrastination and excuses from our elected representatives. There can be no more mistakes like neglecting to include tsunamis in the scope of work.”

Buck stated that British Columbia has spent $1.9 million to address high risk seismic projects since 2017, California has spent between $8 to $12 million on retrofits between 1989 and 2018 in just the San Francisco Bay area, and in 2015 Oregon lawmakers spent $300 million to prepare schools. All three have spent significantly more than Washington State.

The June seismic study is the second phase of an ongoing project which started in 2017 following funding from the Legislature, said Tyler Muench, policy and outreach coordinator for school facilities and organization with the Office of Superintendent of Public Instruction. Initial results were released in 2019, meaning the 2020 session was the first where funding could be put towards retrofitting schools.

“That report came out and we were in a supplemental budget session, which as you know means there wasn’t as much money traditionally available,” Muench said.

Superintendent Chris Reykdal requested $25 million immediately to retrofit some of the highest priority schools, but received roughly $13 million in the 2020 supplemental budget. These schools can be seen highlighted in red in the following photo.

In the 2021-23 capital budget, OSPI received $40 million, still less than the $50 million they requested, to conduct the following high-priority schools. The funding won’t cover the full cost of renovating the additional school projects seen below.

And in the 2022 supplemental budget, Muench said OSPI is asking for an additional $8.5 million to finish projects from the first list as costs increase.

“The costs tend to only go up unfortunately as you dig deeper and deeper into the building because generally you don’t find a lot of good news,” Muench said.

The seismic report notes that up to 70% of the cost of seismic upgrades to existing buildings comes from having to temporarily remove and then replace infrastructure. If the upgrades can be done as part of planned modernization, it can significantly reduce costs. Muench estimated that in order to fully address seismic safety in every school in Washington built before 1997, when modern seismic codes were adopted, it would cost upwards of $3 billion.

One of the key takeaways from the report, Muench said, was how much the state doesn’t know about its school inventory, including exactly how many schools need vertical evacuation structures in case of tsunamis, and which schools are on liquefiable soils like sand.

But another problem is the way that the state finances school capital projects, which are split between the state and local school districts. While some school districts have substantial local tax bases to match state funds, others do not. An example comes from the Seattle Public Schools district, which has already created a seismic retrofitting program.

For school districts that have a smaller tax base, their retrofitting projects get bottlenecked. Muench said it’s a problem that the Legislature needs to address and put more money towards.

“Our opinion at OSPI is that a student’s ZIP code or school district should not be the determining factor of a student’s wellbeing during an earthquake,” he said.

Even then, the retrofitting program only applies to buildings that are used for direct student instruction like classrooms and gyms. It’s an issue that Rep. Sharon Tomiko Santos (D-37th LD), who chairs the House Education Committee and serves on the House Capital Budget Committee, is thinking of too.

Santos was involved with ensuring there were seismic assessments of schools, but said the results were not a surprise to her with many older school buildings in the state.

“It is going to have to be a part of our consideration,” Santos said. “We have struggled for many, many years… and we have a very inadequate school construction funding formula.”

Spaces like hallways aren’t considered in the funding formula, as they’re not instruction space. But these are still important parts of school facilities. The formula also doesn’t consider codes and standards dealing with equipment like HVAC systems or sprinklers, which all add cost to projects for local school districts.

Santos said the Capital Budget Committee will examine whether they can find an emergency funding source to address seismic upgrades quickly while also piecing together a long-term, formulaic funding fix.