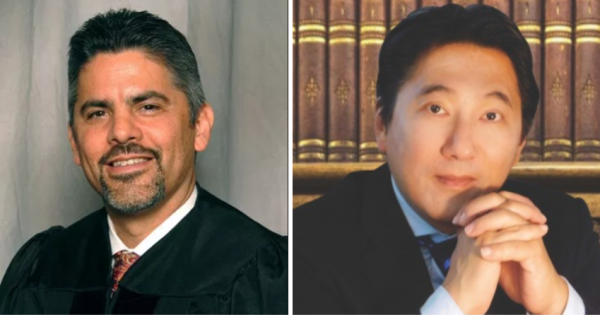 There are three Washington Supreme Court justices up for re-election this year. Just one is up against a challenger: Justice Steven Gonzalez.

At least 10 bar associations in Washington rate Gonzalez Exceptionally Well Qualified. His resume includes titles like Assistant U.S. Attorney in the Western District of Washington, Domestic Violence Prosecutor for the City of Seattle, and trial judge on the King County Superior Court. The Columbian, Seattle Times, The Stranger, Tacoma News Tribune, and Yakima Herald all endorsed his re-election.

Attorney Nathan Choi, who’s challenging Gonzalez, hasn’t received any endorsements. Choi isn’t rated by any bar associations; his campaign website includes a video about the “Deep State” and lists his Mensa membership as one of his top qualifications. The King County Bar Association admonished him for violating their Fair Campaign Guidelines when he vied for a Washington Court of Appeals judgeship last year; and the state sued him for failing to file required paperwork on campaign financing and committee registration.

The seat may seem like a shoo-in for Gonzalez. Perhaps that’s why there’s been little commentary, apart from endorsements, on the match-up until now. But media coverage of the race is ramping up as next week’s final tally looms.

Recent media coverage often cites statistics from a poll taken by the Northwest Progressive Institute in May 2018. Results showed that, out of 675 likely voters, 74 percent weren’t sure who they’d vote for if they were to vote that day. Of the remaining, 16 percent said they would vote for Choi, leaving 10 percent who would vote for Gonzalez.

The numbers — while taken from a small sample size six months before election — shed light on an issue that isn’t new to Gonzalez, as reporting from NW News Network points out. In his 2012 election, Gonzalez’s opponent, Bruce Danielson, did not campaign or fund-raise and still received 43 percent of the vote.

The 2012 results raised questions about the role of surnames in such an election. A statistical analysis out of the University of Washington found strong evidence that “racial voting bias distorted the González-Danielson race in certain Washington counties.”

A similar conversation is emerging now. In her Northwest Asian Weekly op-ed, Justice Mary Yu stressed the importance of looking beyond a name in this particular race.

“An ‘Asian sounding’ name might be attractive to our community, especially if you do not have sufficient information about his lack of qualifications,” Yu wrote. “But, please don’t be fooled by a name.”

A Reuters/Ipsos opinion poll recently found that a third of registered U.S. voters didn’t even know the name of their party’s congressional candidate for office this year — and those are races that receive far more media attention than a nonpartisan, judicial race.

Since Choi and Gonzalez are the only two vying for position 8, general election ballots may be the first time many voters see the candidates’ names. In Washington state, judicial candidates don’t appear on primary ballots unless there are more than two candidates.

Washington state law limits judicial candidates’ campaign fundraising to donations of $2,000 and under, further limiting candidates’ ability to get their names and faces out there. (Gonzalez has still managed to bring in over $300,000 in donations.)

In an interview KIRO, Gonzalez expressed that he’s hopeful readers will “inform themselves.”

The Washington Supreme Court issues decisions that reverberate throughout the state. In just the last month, the justices struck down the death penalty, banned life-without-parole sentences for juveniles, and allowed the state to continue funding charter schools. Maybe a race so important, where there’s low potential for campaigning plus racial biases at play, can start a bigger conversation. How can judicial candidates reach voters earlier — even when the race seems like a shoo-in?