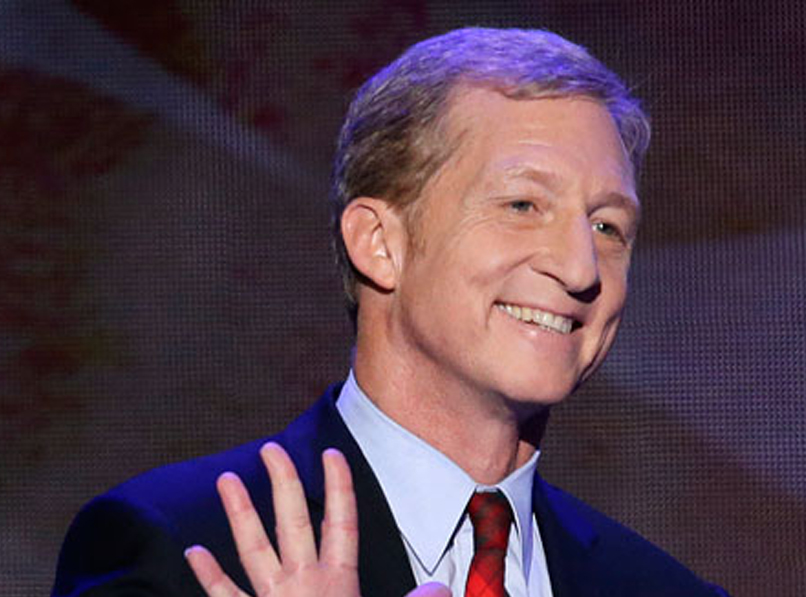 California Billionaire Dumps Another $2.5 Million Into Washington Political Action Committee – and Creates the Mystery of the Season 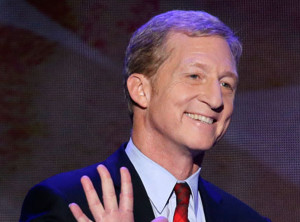 OLYMPIA, Oct. 16.—Tom Steyer, the big-spending California billionaire who made a splash in local Democratic politics this year with an enormous contribution in a Kitsap Senate race, dumped another $2.5 million last week into his Evergreen-state political action committee – and has triggered the biggest political mystery of this year’s campaign season.

That makes a total $6.3 million that the financier has funneled to the state of Washington this year. Some of it has found its way to the hot state Senate race in the 26th District, where he has spent a staggering-for-this-state $400,000 to promote Democrat Nathan Schlicher.

Another $1 million or so has gone from Washington state to, of all places, Virigina, where Steyer is weighing in on a gubernatorial race, also on the Democratic side.

But that leaves some $3.8 million sitting in the bank — and no one who watches such things can figure out why Steyer bothered writing that $2.5 million check last week. As of Tuesday, Steyer was blocked by Washington law from plowing any more money into independent campaigns for Washington political candidates. And all anyone can figure is that it is part of a mysterious scheme beyond anyone’s ken – the sort of thing that always somehow seems darker and more ominous when it takes place on the Republican side of the aisle. “I guarantee you, if the shoe was on the other foot and the Koch Brothers were doing this in the state of Washington, FUSE Washington would be all over Facebook and their Tweets would be obnoxiously long, and the state Democratic Party would be upset and they would be crying foul,” says Keith Schipper, communications director for the state Republican Party. “But you know, when it’s on the other side, they have free rein.”

Steyer may not give many interviews, but he’s no Howard Hughes, and a quick check of the Internet tells his story. First things first, the $6.3 million he parked in Washington state is just the tip of the iceberg –last year, for instance, he spent $32 million on a California initiative that ended a business tax break and directed the proceeds to clean energy development. Steyer’s big cause is climate change – indeed, he has dubbed his Washington-state PAC the “NextGen Climate Action Committee.” And he has a checkbook to match those globe-sized interests. The former hedge fund manager last year cashed out at Farallon Capital Management in San Francisco, a $20 billion company he founded in 1986.

Steyer’s activism began in 2010, when he was still connected with the firm. He became incensed when the aforementioned Kochs and out-of-state oil refiners spent big money on a California ballot measure to overturn the state’s cap-and-trade law. So he cut a $5 million check to the campaign against Prop. 23, the single biggest contribution, and he went dialing-for-dollars across the country himself. The measure was defeated and a new political career was born. Steyer told Forbes Magazine in 2011 that he intended to give his fortune to philanthropic causes; later he formed what he called the Next Generation foundation to promote clean-energy.

In some circles he has been talked about as a Democratic candidate for California governor, and indeed his partisan activities have all been on that side of the aisle. Last year, Steyer addressed the National Democratic Convention about the importance of clean energy in the national economy. And in this state in May he appeared alongside like-minded Gov. Jay Inslee at a breakfast sponsored by the green group Climate Solutions. A press release quotes him as saying,

“What are we on the West Coast going to do about the bigger picture of climate change? I think the solution is pretty straightforward: the West Coast needs to lead. And we will do so by exploiting every opportunity in the proposition process, the electoral process and the legislative process. It’s a big task.”

But the money? Maybe that’s not so big, not for a member of the “one-percent.” Washington races are small potatoes by California standards, and the price of a table at a Sacramento fund-raiser might be enough to win a race in this state. The typical legislative race in this state costs a couple hundred thousand dollars, and until this year the record for spending in a single race was $1.4 million. Now, thanks in part to the $400,000 Steyer pumped into independent-expenditure efforts in the 26th District, the race between Republican Jan Angel and Democrat Nathan Schlicher has already become the biggest-spending race in state history.

When independent expenditures are counted, total spending in the race has just topped $2 million — $2,026,607 to be precise, according to reports filed through Tuesday. One fifth of that comes from Steyer.

Steyer is weighing in for Schlicher, of course. His NextGen campaign committee cut checks totaling $250,000 to the She’s Changed PAC, the committee that is coordinating the independent-expenditure effort against Angel. It appears to have funneled another $150,000 through the Washington Conservation Voters, because Steyer’s committee contributed that amount to the Washington Conservation Voters, and the organization made donations of the same amount to the She’s Changed PAC.

For his part, Schlicher, an emergency-room doctor and political neophyte who was appointed to fill a Senate vacancy this year, says he never has met Steyer. “It’s one of those small funny things,” he says. “I appreciate that he cares enough about the race to support me and that he thinks I am a valuable enough candidate for him to put his faith in. But I’ve never talked to him.”

Says Angel, “He is trying to buy a race.”

Exactly what Steyer intends to do with that remaining $3.8 million is the question of the day. Washington State Wire attempted to contact a spokesman for the NextGen campaign committee Tuesday, but no luck. Yet it is clear that Steyer can’t spend it on the Senate race. Three weeks before an election, Washington blocks transfers of more than $5,000 from one political action committee to another. That means Steyer’s NextGen committee is forbidden from pumping any more money into the She’s Changed PAC. Technically speaking, Steyer’s committee could launch an independent campaign of its own, but the Public Disclosure Commission records show none of the necessary groundwork – no hiring of local political consultants, advertising agencies, printing firms. So unless Steyer plans to spend the money on a ballot-measure campaign, which is still permissible, that money might just have to remain in the bank until the next election.

That’s what worries Senate Republican Leader Mark Schoesler, R-Ritzville. A amount of money that large “could be held as a threat over legislators,” he says. “They could say, if you don’t cooperate, we will come after you like we did Jan Angel. It sends a message to legislators that one individual is willing to buy or rent a candidate and a caucus.

“So if you don’t cooperate, you will be the next Jan Angel. On the issues of the coal ports, the petroleum taxes, if you don’t do as you as you are told, there’s this big club out there – this billionaire who is willing to spend more money than any other interest group in the state of Washington. It serves as a threat to independent minds in the Legislature on environmental issues – that’s how the money could change Washington politics.”

Sure, the Senate Republican Campaign Committee gets money from interest groups inclined to support Republicans, Schoesler says, just as the Democrats get money from groups inclined to support Democrats. But never in amounts like that. “Nothing is in the same league. Nothing is even close. If I made one group angry, it wouldn’t take us down. But I guess that if Schlicher started saying good things about coal, they could lose their entire financing source.”