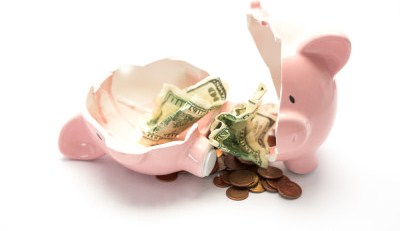 The Budget Shortfall That No One Wants to Talk About

After completing the longest legislative session in Washington State history last year, legislators were hoping to keep the short session short. Without a two year budget to pass and an increase in revenue and savings of almost $400 million, the idea of ‘getting out on time’ didn’t seem that far fetched.

“Just to put this into perspective, the state had 375 million dollars coming in in additional revenues but low income health erases all of that,” Senator Andy Hill (R-Redmond) remarked. During the 2015 budget negotiations a combination of savings and unexpected increases in revenue left the state with almost 400 million dollars, yet now increases in spending (partially driven by Medicaid expenses) have changed the picture dramatically.

What Happened in the Interim

The Senate Ways & Means staff reported that the balance of the Near General Fund plus the Opportunity Pathways Account ballooned from from $-23 million to -$525 in the four year outlook since legislators left town. Out of the $876 million dollars in increased costs, $463 million are from the Health Care Authority. 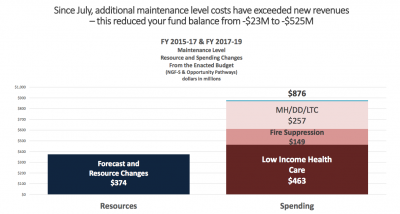 Since enacting the 2015-17 budget, the Health Care Authority set managed care rates using the actuarial services of Milliman. These rates were much higher than the 2% increase in costs projected in February 2015.  A presentation by the Senate Ways & Means staff shows that the state will need $191 million for the remainder of the 2015-17 to cover Medicaid costs. This is in contrast to savings of $62 million that were projected in the enacted 2015-17 budget.

Combined with the cost of last year’s catastrophic fires, increases in costs from the Washington Department of Corrections and mental health spending, this amounts to a deficit of nearly half a billion dollars in the 2017-2019 biennium and wipes out the $375 million mentioned earlier.

In a policy brief on the issue The Washington Research Council (WRC) stated, ”Accounting for the increased maintenance level spending needed in 2016 (but not including fire suppression costs or McCleary fines), the November 2015 budget outlook produced by the ERFC estimates that the unrestricted ending fund balance in 2017-19 will be negative $473 million.” This did not take Governor Inslee’s proposed supplemental budget into account, which includes policy spending on top of maintenance spending. Another policy brief by WRC announced the Governor’s budget proposal is “in the red by over 700 million.”

Needless to say, the projected shortfall came as unwelcome news, especially given that legislators are required to invest an additional 3 to 4 billion dollars in basic education by 2018.

The Health Care Authority’s presentation shows that assumptions for caseload and utilization were fairly accurate, but costs were not. The higher costs come from increases per person managed care costs, driven by the rise in pharmaceutical prices.

According to Nathan Johnson, Chief Policy Officer at the Washington State Health Care Authority, “66% percent of the rate increase we’re talking about, primarily driven by the age/blind/disabled population but also including children and families, are driven by an increase in pharmacy costs. These pharmacy costs are not being driven by people using more drugs– utilization is virtually flat. This is being driven by a nation-wide trend relating to the price of those drugs…” 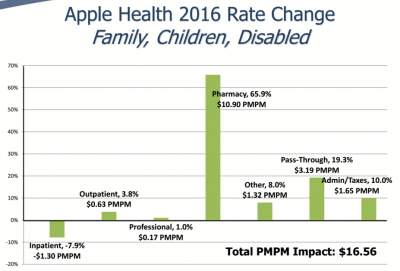 Although many point to the high price of new treatments for Hepatitis C, Johnson says the increase was actually driven by price increases of other drugs. “The Hepatitis C drugs are carved out of the managed care rate…it’s actually other other drugs that are contributing to this year’s rate increases,” said Johnson.

Aside from cost increases, projected savings from the Healthcare Innovation Plan/Healthier Washington (proposed by Governor Inslee in House Bill 2572), which was funded through a $65 million federal grant, went unrealized in 2015. The enacted budget proposed $4 million in savings in 2015 with millions more in following years. 58% of these savings were to be realized through the integration of physical and behavioral health. The updated savings, like the updated costs, were disappointing to legislators. Now, the HCA expects to save less than $1.5 million by 2017.

Senator Jim Hargrove (D-Hoquiam) pushed hard on the other 42% of estimated savings during the work session. Johnson, who sat before the committee, said that the fiscal note of the bill did not reflect the bill as it was passed. The original fiscal note estimated almost $500 million in savings by 2019. After asking several clarifying questions, Senator Hargrove remained confused. Although the HCA says their focus was on integration, it’s unclear how off-base the fiscal note was and if savings from things other than integration should have been assumed.

A National Phenomena, Mismanagement, or Both?

In an interview Nathan Johnson explained that “The 2015 fiscal year is where the Medicaid program started to see a real spike.”

Although it’s not currently making headlines, in 2015 numerous articles surfaced on the jaw dropping increases in pharmaceutical prices. One, by the Boston Globe, stated that “Concerns about the soaring prices of prescription drugs have focused on new specialty treatments that can cost tens, even hundreds of thousands of dollars per patient. But insurers, health care providers, and industry specialists are now raising alarms about a new source of rising prices: generic drugs.”

That’s consistent with Johnson’s explanation: “It is a combination of drugs becoming more expensive on a year to year basis and the introduction of new drugs with high prices.” From July 2013 to July 2014, the prices of more than 1,200 generic drugs increased by an average 448 percent, according to the Centers for Medicare and Medicaid Services. And, in a 2014 letter to Congress the The National Association of Medicaid Directors asked lawmakers to intervene on the cost of specialty drugs.

According to Johnson, Washington is just one of the many states seeing rising costs in managed care. And, at the state level, there’s not much that can be done to reign in pharmaceutical prices. “Medicaid is experiencing a national trend with pharmacy costs. We have tools to manage costs, but many of those tools address utilization and we don’t have great tools at the state level to address drug prices,” said Johnson.

Cost management is one thing. Forecasting is another. Whether or not the HCA should have been able to more accurately predict managed care rates is a point of contention between legislators and the HCA.

Like Senator Hill, Senator John Braun (R-Centralia), Vice Chair of the Senate Ways and Means Committee, was exasperated with the HCA’s new numbers, characterizing the increase in spending as the result of “mismanagement.”

Senator Braun went on to say that he has a “long running frustration” with the HCA. “Two years ago they had a similar surprise of 100 million dollars.” He went on to say that the Senate had attempted to enhance the state’s actuarial capabilities in 2014 in order to scrutinize the HCA’s numbers. “We convinced the House eventually to go along with that, but unfortunately the Governor vetoed it,” he said.

The language vetoed by Governor Inslee was reinserted into the 2015 supplemental budget bill, and he says that he hopes it will improve forecasting. “The state actuary in the last six months started to build this capability, so I think we’ll have better numbers in the future. At the very least we’ll have an independent review of the HCA’s numbers by the actuary’s office. There’s just not a lot of trust in the HCA’s numbers is the bottom line. We can’t come into session and have, in this case a $500 million surprise over 4 years, every couple years,” he said.

Responding to criticism over the inaccurate forecast, Johnson pointed out, “During the February 2015 forecast process, utilization information available during that time did not justify a change to the assumption of a 2% trend, which is based on historical cost trends of the program. The 2016 rate was based on managed care utilization information from July 2014-June 2015, and during the February 2015 forecast process, much of that utilization and trend associated had not occurred.”

He also made a rhetorical point that the discussion over the HCA’s forecasting capabilities only arises when the agency is over budget and not when rates are lower than expected.

Senator Braun disagrees. He said, “When the HCA made their assumptions to project their per case cost, they made some poor assumptions about growth and assumptions that don’t make sense in hindsight based on what they should have known. We tried hard to establish a way to get better numbers. We didn’t start this crisis and we’ve tried a couple times now to prevent it by having better data. I lay the blame with the HCA and the HCA works for the governor so I think he has to step up and take responsibility for this, frankly.”

He also hinted at a larger pattern of mismanagement: “I’m not here to pick on the governor directly but I think a lot of us are feeling pretty frustrated if you add up the HCA, Department of Corrections, Department of Transportation…You know, there are a lot of things going on that are costing us extra money that could serve the citizens of the state of Washington in better ways”

Although he can’t speak for the entire Inslee administration, Nathan Johnson’s response to allegations of mismanagement is this: “The Health Care Authority has led the Medicaid expansion effort resulting in a two-thirds reduction in the adult uninsured rate and one billion dollars of state savings anticipated to accumulate by June of next year. We have a strong track record with regard to managing cost trends and ensuring quality, and will be building on that going forward. It is bipartisan leadership from our Legislature that has positioned us to lead the country on implementation of the Affordable Care Act, and this partnership will be critical as we look for more ways to improve the forecast and rate setting process.”

As mentioned earlier, extra maintenance costs from the HCA and others flatten the cushion that many legislators were counting on this session. The Governor’s proposed supplemental budget for 2016 earmarks $272 million for Health Care Authority, with the majority for increases in maintenance spending and additional policy spending to make up for unrealized savings from the Healthier Washington project and a denied Medicaid waiver that was requested from the federal government.

As for this session, any bill with appropriations now faces an uphill battle. In a quote to the Washington Research Council, Senator Hill said “The Legislature will have to find a way to cover the increased costs while balancing the four year budget, with an eye toward spending more on education in 2017-2019.”

Senator Braun echoed Hill’s concern, saying that the increase in spending jeopardizes the funding for legislation that would have passed this session. “There are a whole bunch of good projects that would serve the state of washington well if and most if not all of them are going to have to get set aside this year because of this,” he said.
After the 2015 Legislative session one of the big messages from both the governor’s office and the legislature was that the state was able to increase spending without a new revenue source. With obligations for more spending on the horizon, the issue of new revenue looms large. Although it’s not an issue that anyone wants to talk about ahead of elections, it may mean another painfully long session in 2017 or worse: taxes.