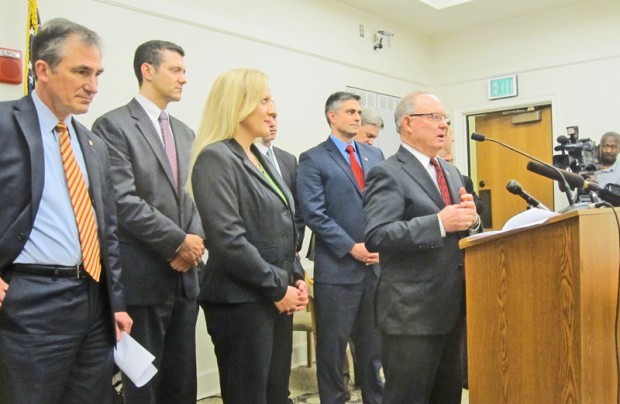 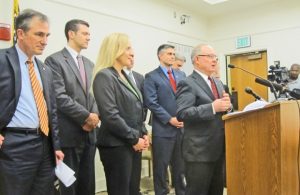 OLYMPIA, March 15.—A legislative impasse over the budget escalated to Defcon-4 Thursday as frustrated Senate coalition forces went public with a new budget proposal and threatened to run over the Senate Democratic Caucus a second time. A furious Gov. Christine Gregoire retaliated by threatening to hold bills hostage and execute them one by one.

Meanwhile, the party that may be more responsible for the standoff than any other – the House Democratic Caucus – wasn’t saying a word. On a day when seemingly every political figure and interest group in the state had something to say about the situation, the House Ds made no statements to the press. House Speaker Frank Chopp, D-Seattle, remains as mysterious as the Sphinx.

The Republicans and centrist Democrats who took over the Senate two weeks ago say House Democrats refuse to negotiate, possibly a political strategy aimed at waiting them out. Evidence suggests they are correct. That’s why the coalition that now governs the Senate abandoned backroom negotiations Thursday and held a news conference to announce a budget proposal that meets the Dems halfway. Next week, if Chopp’s Democrats don’t budge, coalition members say they’ll pass their budget bill in the Senate and possibly force the House Democrats to negotiate.

But the governor, also a Democrat, says she wants to keep a lid on it. With steam almost visible from her ears, Gregoire told reporters that the Senate coalition is going to have to play it her way. That means they’ll have to do their talking in her office – and no negotiating in the press.

To prove her power, Gregoire canceled bill-signing ceremonies for 26 of the 32 bills that were on her Thursday afternoon agenda. Another 23 bill-signing ceremonies scheduled for Friday have been canceled. And the governor threatened to get tougher. She has until March 28 to sign bills that passed in the final days of the regular legislative session, but if lawmakers don’t start talking in her office, on her terms, she promises to whip out her veto pen. “Maybe that will get their attention,” she snapped.

It was a remarkable day, and one that was made for fingerpointing. State Rep. Vincent Buys, R-Bellingham, drove six hours back and forth from his home district for a bill-signing that never happened. “I think the governor is throwing a temper tantrum,” he said.

Lawmakers Thursday were in the fourth day of a special legislative session in which nothing appears to be happening, no substantive progress is being made on the budget, and only a handful of members are actually at the Capitol. Most remain at home, on call for when their votes are finally needed.

But in a Legislature where budget disputes are a frequent occurrence, this is no ordinary breakdown. Bitter feelings remain after the extraordinary takeover that occurred in the Senate the night of March 2, when three Democrats broke with their party and voted with 22 Republicans for a fiscally conservative spending plan that won’t leave the state in the red. Democratic leaders in the House and Senate favor a different approach to the state’s billion-dollar shortfall. They would stave off deeper cuts by shunting $330 million in current school district expenses into the next budget period, thus ensuring that next year’s Legislature will run short by more than $2 billion.

That 25-24 vote in the Senate two weeks ago flipped the Capitol upside down and ejected Senate Democratic leaders from the driver’s seat. Democrats remained in control of the House.

The problem is that the House Democrats haven’t recognized that control has shifted, said Senate Minority Leader Mike Hewitt, R-Walla Walla. It is as if they are “in total denial,” he said.

Coalition leaders say the silence from the House Democrats requires them to take charge. At their news conference Thursday, attended by seven Senate Republicans and the three rebel Democrats, the Gang of 25 released a budget proposal they say offers their best guess about what it will take to settle the argument. Hewitt said that early next week the coalition may pass the budget in the Senate using the same parliamentary tactic that overrode the Senate Democratic leadership on March 2.

Depending on how the coalition does it, the tactic could force negotiations between the House and the Senate, in the form of a conference committee. That would leave the governor with no direct role in the negotiations, although Gregoire still would hold the veto pen.

When one side won’t talk, you can only guess what it wants, said Senate Republican budget chief Joe Zarelli, R-Ridgefield. But the angry speeches by Democrats since the takeover left at least a vague impression.

“We are prepared to kickstart this thing,” he said. “I don’t know how much longer the public and the press would expect us to sit here and not start making ground. So we have presented a proposal to the House as a way to get home. That is what we are doing today.”

The budget plan outlined by the Senate coalition Thursday comes quite a bit closer to the last known position expressed by the House Democrats, a budget proposal they passed a week ago. The new proposal from the coalition restores about $140 million in items that were cut in its previous budget bill. Most significantly, there would be no cuts to K-12 and higher education programs. Nor would the budget shift the school-district payment to the next biennium. The Senate coalition gets the money by reducing the ending fund balance from roughly $600 million to $440 million.

Where the coalition won’t budge, however, is on its plan to skip a public-employee pension payment in conjunction with long-term pension reforms. Critics say the skipped payment of $133 million is as much a gimmick as the deferred school district payment, because it would cost the state an additional $400 million over the long haul, but Zarelli notes that other long-term pension changes contained in the budget would produce a net savings to the state of $1.9 billion.

The coalition plan also cuts the Disability Lifeline, the state’s medical-aid and housing-voucher program for unemployable adults – a longtime favorite of the House Democrats. And perhaps as a bargaining chip, the budget proposal tosses an idea back into the mix that was shot down earlier this year by the governor and Democratic leaders – a now relatively modest scheme to launch 10 charter schools in poor-performing school districts.

The key thing, Zarelli said, is that the Senate coalition plan will allow books to balance this year and next. So no $2 billion in red ink for 2013.

Some Talk, No Action

What infuriated the governor Thursday was the idea that the Senate coalition is making an end-run around budget negotiations that she has been trying to organize herself. She called legislative leaders into her office the first three days of this week. Then she called budget-writers into her office Thursday morning. The way she sees it, the first rule of Negotiating Club is you don’t talk about Negotiating Club.

“I’m trying to be restrained,” she said. “I’m disappointed. I am frustrated. This is no way to get a budget through the Washington state Legislature.”

It is unclear whether the governor’s approach stands any chance of success, however. “It’s been a mixed bag,” she admitted. And if the talks are supposed to be secret, Hewitt says his side was incensed to see that Senate Majority Leader Lisa Brown, D-Spokane, discussed details Wednesday with the Seattle political website PubliCola.

If anything has been accomplished in those backroom talks, it doesn’t sound like much. So far, say Hewitt and Zarelli, there hasn’t been any discussion of the nitty-gritty details of budgeting. The public silence from the House Democrats accentuates the mystery.

Hewitt said the coalition has tried to operate in good faith since the time of the takeover. He presented reporters with a copy of a formal letter he sent to Chopp on March 5. In his letter, Hewitt said he would like to include the Senate Democrats and the House Republicans in the conversation. “Please let me know at your earliest convenience when negotiations can begin,” it said.

Chopp never responded, Hewitt said. Instead, the House passed its latest budget bill on the final night of the regular session, 53-45, incorporating a few of the ideas the Senate Democrats had proposed – essentially another one-sided compromise, just like the one the Senate coalition proposed on Thursday. 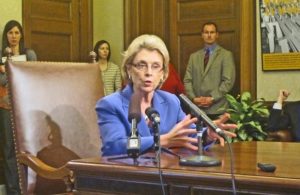 Gregoire was sharply critical of the Senate coalition forces for taking the battle out of her office, but she said her fury knows no partisan bounds. A close look at the 26 bill-signings she put on hold Thursday shows it was a two-handed slap – 13 are prime-sponsored by Democrats, and 13 by Republicans.

She said vetoes are the next step.

“I have given them a message today. My message is I’m not signing their bills. If you keep making no progress, I will not sign your bills, and then time will run out, and I won’t have any time to do anything but [veto]. I’m telling you the truth.”

And she said she is expecting rank-and-file members and lobbyists to begin putting pressure on legislative leaders. Gregoire said she has had it with a Legislature that should have passed a budget months ago. “We should have had a budget, in my opinion, in December. How is that for where my frustration level is? I have been restrained. I have been complimentary. I have negotiated in good faith. Time is up.”

At the very least, that anger is beginning to trickle downhill. Buys wasn’t the only one who made a useless trip to Olympia Thursday. State Rep. Jan Angel came down from Port Orchard. State Rep. Larry Haler came all the way from the Tri-Cities – and because of snow on the pass, he had to go the long way, through Portland.

Buys’ bill has no impact on the budget. If it ever takes effect, it will change the number of members on the state Dairy Commission. And Buys said, “Just because she’s not getting her way, she’s holding bills hostage that have nothing to do with budget negotiations, bills that have to do with people’s lives. Saying ‘I’m not going to do this because I’m upset – that’s kind of childish.’”