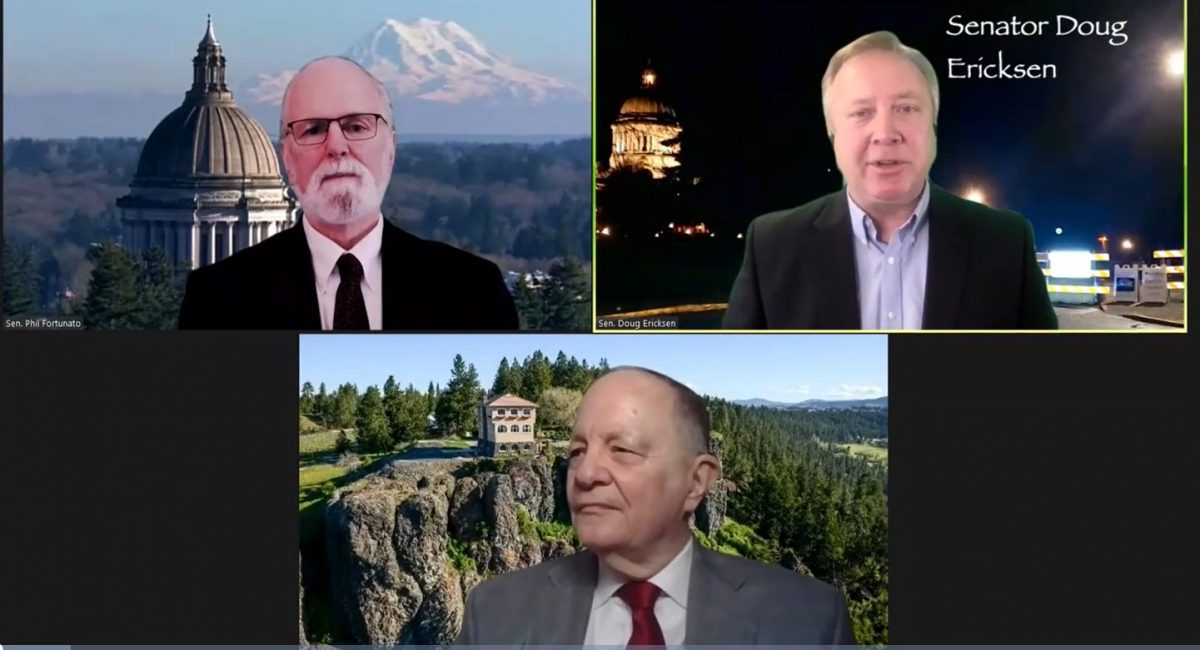 Braun on transportation proposals from King and Senate Freedom Caucus: “I appreciate the work they’re both doing.”

The Senate Freedom Caucus unveiled their transportation-funding proposal this week, a response to different proposals put forward by Democrats as well as the lead Republican on the Senate Transportation Committee.

Braun said that he disagrees with utilizing the revenue sources that King includes, though he approves of other elements of the proposal.

Senator King has proposed another alternative with some other sources of funding that I don’t agree with, and I’ve been clear with him and the public that I don’t agree with it, but he’s also done some things that are really valuable. He’s talked about not just projects but maintenance. Maintenance issues for our transportation system around the state are critical and I think Senator King more than just about anybody has been focused on that.”

According to Sen. Phil Fortunato (R-Auburn), the Freedom Caucus proposal is designed to provide a funding source for transportation that is inflation-linked. “That way, you don’t have to keep raising the gas tax every other day in order to keep up with that,” said Fortunato.

Policymakers on both sides of the aisle expect gas tax revenue to decline in the future. One Democratic proposal to backfill that revenue hole is a mileage-based tax for electric and plug-in hybrid vehicles.

Rather than a radical divergence from the approach of Senate Republicans more broadly, Braun says the Freedom Caucus proposal closely mirrors the transportation funding scheme included in the 2021-2023 Senate Republican Operating Budget proposal.

The Freedom Caucus is looking at new and I think better ways to fund our transportation system long term. In the Senate Republican budget which we rolled out a couple weeks ago, we did exactly the same thing, we moved sales tax on motor vehicles to the transportation account and provided $24 billion in that proposal … over the next 16 years. Not a new idea and I appreciate them advocating for it.”

When asked whether diverting motor vehicles sales tax revenue would draw money from general fund away from education, Fortunato said that due to constitutional requirements imposed by the 2012 McCleary decision and revenue from a 2017 state property tax adjustment, education is “already taken care of.”

The general fund is the state’s principal fund, supporting a wide range of services.

Braun says using motor vehicles sales tax revenue to fund transportation makes the most sense. “You go to buy a car or parts for your car, new or used, the sales tax you pay goes to operate and fund the roads and bridges that you use that vehicle on.”

Proponents of the approach say recent economic trends bode well for the Freedom Caucus plan. According to a February state revenue update, Washington car and truck sales surged in January to their highest level in more than two years.

There is no fiscal note for the Freedom Caucus proposal, as it did not receive a hearing this session.

There is bipartisan consensus to repairs to road culverts blocking salmon migration, which Washington is under a federal court order to do.

Freedom Caucus members say their proposal is in line with public opinion.

When asked whether he agreed that the broader public was in favor of the Freedom Caucus approach, Braun said it was too early to tell.

The four-member caucus formed this session to advocate for core conservative principles. “The Freedom Caucus will tackle big-picture issues that often cannot be encompassed by broader political caucuses that must represent a wide variety of views,” said Ericksen.

Braun says that the priorities of the group don’t diverge much from the rest of the caucus.

They are a subgroup within our caucus. I’ve been supportive of them. They’ve treated me and the rest of the caucus very respectfully. We want to do the exact same. When you look at the thing they’re focused on, they’re not that much different from where the caucus is. So, good for them.”