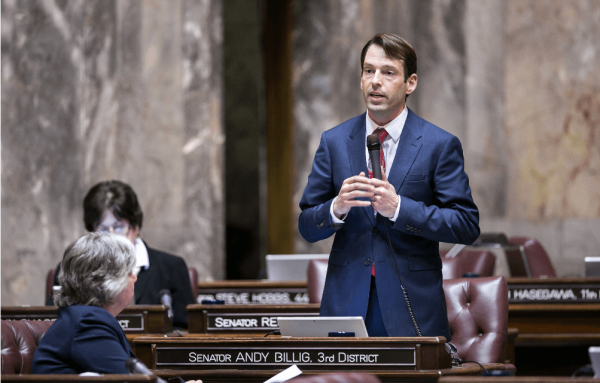 TUKWILA – Sen. Andy Billig, D-Spokane, will be the new Senate Majority Leader in the Washington State Senate, following a vote among Senate Democrats on Monday.

Billig will take over immediately as Sen. Sharon Nelson, D-Maury Island, prepares to retire after more than a decade of service in the Legislature, including five years (2013-18) as leader of the Senate Democrats.

Billig has served in the Senate since 2013 and was first elected to the state House of Representatives in 2011. Billig is the only Democrat in the Senate representing eastern Washington, but he’s not the first Spokane Democrat to lead Senate Democrats in Olympia. Former state legislator Lisa Brown previously held Billig’s seat and was majority leader from 2005-13.

In the Legislature, Billig has been a leading voice on early learning and was instrumental in forging compromise on the state’s education funding challenge. Billig has also been a fierce advocate for campaign finance reform. Earlier this year, he sponsored and passed the DISCLOSE Act, which exposes the source of hidden contributions in campaigns and closes campaign finance disclosure loopholes.

Although a handful of 2018 election results are too close to call, Billig is poised to lead a larger majority of Democrats in the Senate next year. In 2018, Democrats took back a slim 25-24 majority after five years of Republican control. In the short 60-day session last year, Democrats made progress on a bevy of issues that had stymied in a split Legislature, including education funding, voting rights, net neutrality, women’s health and LGBTQ rights.

“I’m extremely eager to build on the success we had in 2018. I am humbled to lead this diverse and talented group of senators. This caucus recognizes that bipartisanship and viewpoints from every corner of Washington are crucial in moving our state forward,” Billig said. “We welcome new members whose energy and passion will help Senate Democrats continue to put people first and tackle the issues Washingtonians care about most – affordable health care, tax fairness, public education, mental health, public safety from gun violence, climate change, and more.”