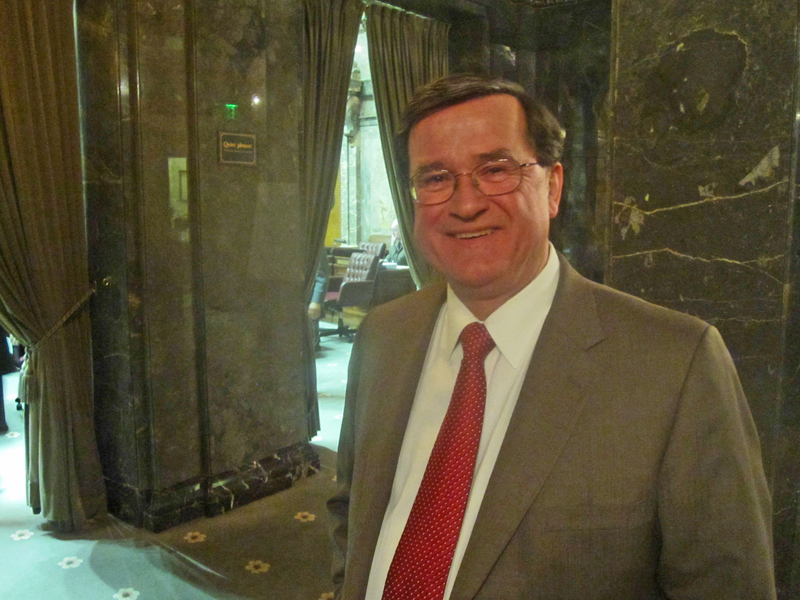 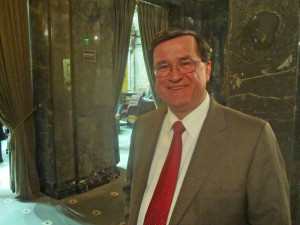 OLYMPIA, March 1.—The long wait is over – the Senate Majority Coalition Caucus has finally put its transportation proposal in bill form, and it seems to show that maybe something has been happening in that back room these last couple of weeks after all. Now the ball is in the Democrats’ court – will they be willing to help pass a $12.2 billion tax increase in an election year?

The three bills, dropped late Friday afternoon, demonstrate major movement since the largely-Republican Senate majority forced the issue Feb. 13 and jump-started the long-stalled talks on a gas-tax increase. The Senate is still proposing an 11.5 cent gas-tax increase, but it is offering more money for transit, and there appears to be a bit of compromise on the big reform issues that have been so vexing for the Dems.

The bills reflect the latest back-room offer from the Senate Majority Coalition, says Senate Transportation Co-Chair Curtis King, R-Yakima. “We just thought we would drop bills that would coincide with the last offer we made to the Ds in the Senate, and the bills just line up accordingly.”

Now that it is finally possible to see the bill language, a few other things become clear. The Senate majority would not require that the gas-tax go to the voters, but it will not try to block a public vote.  Another key point: Green-minded Gov. Jay Inslee would not be able to impose low-carbon fuel standards by executive order.

First Bills From the Senate

You might say these three bills are the longest-awaited measures in recent legislative history. The transportation effort began three years ago under Gov. Christine Gregoire. She convened a task force that identified some $50 billion in transportation needs. Last year the state House, under the control of Democrats, narrowly passed a bills that would have imposed a 10.5-cent-a-gallon fuel-tax increase. How serious they were about it is a matter of conjecture, given that they did it during the final two days of last year’s legislative session, at a point when adjournment was certain and outstanding issues would have required weeks if not months of debate.

Until this point, the Senate has not presented a formal proposal in the form of legislation. That has given the other team fodder for argument. Democratic Gov. Inslee has been alternately attacking the Senate for inaction due to “Republican ideology,” talking about the Senate’s “sins,” and then calling for cool and mature heads to compromise. But the Senate majority coalition has been working. It convened a series of public hearings around the state last fall; in November it floated one proposal; on February 13 a second one. Talks broke down in December, and sometimes the political argument has approached the absurd. House Democrats demanded this session that the Senate take a vote on a transportation package before they returned to the negotiating table, arguing that fair is fair, they passed a bill last session and the Senate should do the same.

King has suggested that the reluctance to deal has more to do with traditional trepidation about passing a tax hike in an election year. The argument from the House Democrats ignores a key point of procedure: Democrats and Republicans would have to negotiate and reach an agreement in the Senate before a bill could be advanced to the Senate floor for a vote. The Senate Transportation Committee is co-chaired by King, a Republican, and by state Sen. Tracey Eide, D-Federal Way. That means no measure can pass out of committee unless both parties approve. Though talks have proceeded between the Senate Democratic Caucus and the Majority Coalition over the last two weeks, the House Ds are of course a necessary partner. King says he will speak with Eide on Monday to gauge whether the Democrats are willing to permit a vote to take place. “I have to talk with my co-chair on Monday and see whether will be able to do that or not,” he said. “At this point, I don’t know.”

There is also an issue that really isn’t a matter of procedure but rather political reality. It is going to take votes from both sides to pass a tax increase. For his part, King says he can guarantee 13 votes from the Majority Coalition. It’s up to the Ds to decide whether they wish to offer the other 12 that would be required to pass a bill. Bipartisan cooperation will be required. “That has been the history of every transportation package in the history of the Legislature, and it is our starting point,” King said.

The three bills are available for inspection on the state website – Senate Bills 6577, 6578 and 6579. The three-bill formula is standard in transportation packages – the first measure enacts the taxes, the second bill tells how the money will be spent, and the third authorizes the passage of bonds. The latter measure requires a 60 percent vote.

Though the big sticking points are the same as they always have been, the latest proposal reflects movement toward compromise. All along the Senate majority has been demanding big reforms in the way the state spends transportation dollars. The biggie is the sales tax – Democrats argue that the state ought to continue its longstanding practice of siphoning gas-tax money for the operating budget by levying a sales tax on construction materials. The earlier Senate proposals would have banned the practice outright, generating $840 million over 10 years for road construction. The new version generates slightly less, $720 million.

Another has been a proposal by the Senate to shunt the costs of some environmental projects to the state’s hazardous substances tax, mainly stormwater drainage projects associated with road construction. That proposal has raised the hackles of the state’s environmental groups – they see that lucrative tax, paid mainly by the oil industry, as a source of funding for their own preferred projects. The Feb. 13 proposal would have taken $56 million from that account; the new one spends $40 million.

Reforms to apprenticeship and prevailing-wage rules, a bone of contention with labor groups, have been mitigated somewhat by a stipulation that the changes would apply to projects in the future, and not current projects. Senate goal is to bring costly state prevailing-wage survey practices in line with less-onerous federal regulations.

In addition, the Senate spending plan increases the amount of money that would go to transit, bicycle lanes and pedestrian walkways. The latest proposal raises its offer from $667 million to $804 million.

Does Not Require Referendum

Keen observers of the transportation debate will note three things about SB 6577. The first is that it does not require a public referendum on the gas-tax hike, truck-weight fees and other revenue measures. That has been a key point for the state’s business community. Given the history of previous gas tax increases in this state, a repeal effort seems inevitable. Business interests stand ready to finance a campaign for a gas-tax increase, but they argue they stand a better chance if the Legislature passes the measure outright, rather than referring the measure to the ballot and leaving it to voters.

The second point is that the bill does not declare an “emergency” and take effect immediately – a point that has a big effect on whatever repeal campaign might be mounted. By declaring an emergency, the Legislature would require that opponents file a rollback initiative. That would impose a difficult canvassing requirement of 246,372 signatures. But because the bill does not contain an emergency clause, opponents would be allowed to file a repeal referendum, which requires only half that number of signatures.

The third striking thing about the revenue measure is that it appears to block any executive order from the governor that would impose low-carbon fuel standards on the state. SB 6577 declares “legislative intent” that the governor may not impose fuel standards without a vote of the Legislature. Lawmakers are suspicious that Gov. Jay Inslee, who has made climate change policy a singular passion, might attempt to use executive authority to order a change in the composition of motor fuel. The Department of Ecology maintains the governor has the ability to do so, under the state Clean Air Act. The governors of Oregon and California have done exactly that, and Inslee signed an agreement with them last year in which he promised this state would follow suit, without saying exactly how.

The hitch is that the fuel standards are proving extraordinarily difficult to comply with in California, where stringent standards are supposed to come into play next year. Fuel industry sources point to impending market disruptions and dramatic increases in fuel prices. In this state, Inslee has refused to offer assurances to the Legislature that he will not impose the rules; instead he has promised merely that if he imposes low-carbon fuel standards, he will do so wisely. Inslee’s refusal to offer a reassurance to worried business interests has whipped many into a high state of alarm; the Washington Trucking Associations has already declared that it will oppose a transportation package if low-carbon fuel standards remain a possibility.