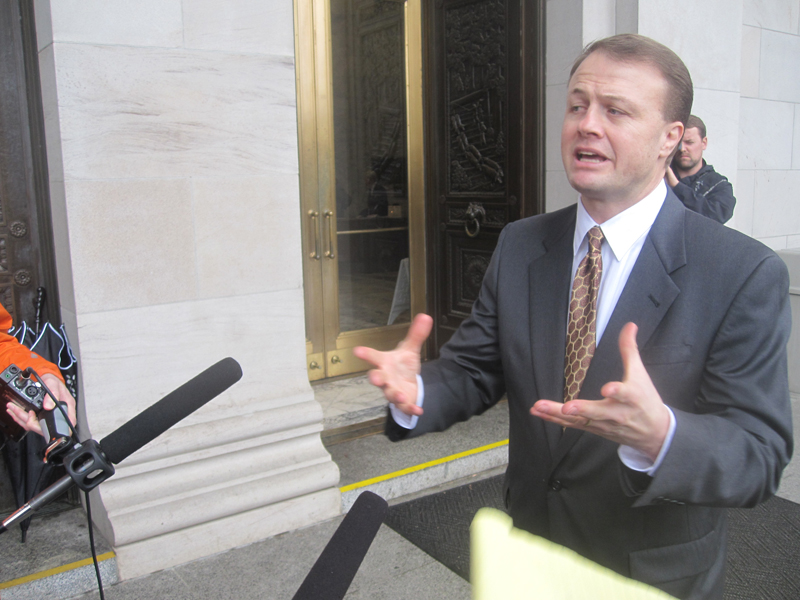 As Supreme Court Bounces Popular Two-Thirds Rule, Everyone Has Something to Say

Two-Thirds for Taxes is No More -- Some Mourn, Some Exult 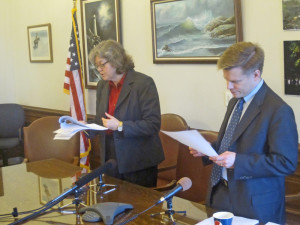 OLYMPIA, Feb. 28. – The state Supreme Court’s momentous decision Thursday to overturn the state’s popular two-thirds-for-taxes rule brought an avalanche of reaction from every corner of Washington’s political community. Dismay, exultation – it poured in all day long, in the form of press releases, press conferences and fund-raising pleas. All of which went to show the decision’s importance: A rule that has proven wildly popular with Washington voters, putting the brakes on the Legislature’s ability to raise taxes, forcing majorities to negotiate with minorities, is no more. And a 20-year era in which the voter initiative reigned king has been set aside.

All About the Kids

For Sen. David Frockt and Rep. Jamie Pedersen, both D-Seattle, and Rep. Laurie Jinkins, D-Tacoma, it was time for a victory lap. Back in 2011, they coordinated a scripted “colloquoy” on the House floor that set the case in motion, on a bill that would have ended a tax exemption for banks headquartered out of state. It garnered 52 votes, a majority, but not the two-thirds required by the rule. The three appeared together at a press conference Thursday morning. Said Jinkins, “I totally consider this a victory for my son who is 12 years old in middle school, and is one of the kids in the state of Washington who are fighting to succeed in this state and in this world. We have been unable to provide the funding for them to have the education they deserve. Jamie has kids, and David has twins and so many people in this Legislature and across the state have kids — they are fighting for this, to be able to have an education system that works for their kids, that will make them successful, and I think that everything about this decision is about those kids.” 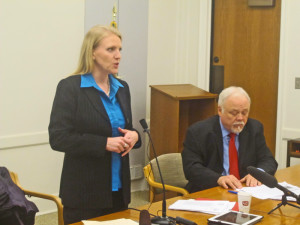 It’s all about future generations, Sen. Janea Holmquist Newbry says as she touts a constitutional amendment.

State Sen. Janea Holmquist Newbry, R-Moses Lake, was talking about kids, too. As one of the backers of Initiative 1053, one of the many iterations of the two-thirds rule, Holmquist Newbry appeared alongside Sens. Pam Roach, R-Auburn and Don Benton, R-Vancouver, to tout an effort to pass a two-thirds-for-taxes constitutional amendment. But she couldn’t stay to the end. “I have just got to apologize,” she said. “I have to leave. I have a 3 1/2-month-old baby boy that just got dropped off at my office. I have to run over there. That just brings to light one of the reasons I am fighting so hard for this. It is that our tax burden on this generation is one thing, but the tax burden on the next generation is something that I am keeping in mind when we are fighting for this taxpayer protection.”

So Much for Eyman’s Baby 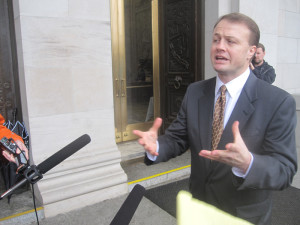 Tim Eyman sticks to policy as reporters press for a gut reaction.

Speaking of children, you might say initiative promoter Tim Eyman lost one – or maybe it was triplets. Washington voters have approved five two-thirds-for-taxes measures and the last three have been his. Looking a bit pained during a news conference on the Capitol steps, the normally ebullient Eyman was rather more restrained than usual. As reporters pressed him to speak from the gut – “Are you angry? Are you sad?” – Eyman stuck to policy.

“I think what you have seen during these recent legislative sessions is just an absolute onslaught of proposals to raise taxes, and I think most voters, when they voted for Initiative 1185, recognized that that it was likely to restrain a Legislature that cannot restrain itself,” he said. “I think a lot of voters are rightly concerned today that without this extra protection, a lot of these proposals will move forward.”

Eyman noted that the Supreme Court decision leaves intact two key pieces of I-1185 and its predecessor initiatives – fee increases still must be approved by the Legislature, and advisory votes on tax increases still must be referred to the ballot. But in probably the most revealing comment of the day – displaying a bit of unaccustomed humility — Eyman acknowledged that sometimes his anti-tax initiatives succeed not because of him but in spite of him. It’s always about the strength of the idea, he said.

“I would simply make the point that imagine if this policy was being promoted by a good person, a likable person, how much more popular it would actually be,” he said. “I think the reality is that the voters of this state take this policy very seriously. They support it, they fight for it, they are going to vote for it. And even sometimes when its spokesperson steps on his own feet sometimes, the reality is that it has always been about the policy, and on this policy the vote has always been unambiguous. The question is now [a matter of] looking to the Legislature. How are they going to act? Are they actually going to respond to that? Or are they going to do what the governor did today, and hop and skip and dance and celebrate? I hope they don’t.” 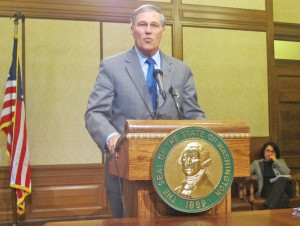 Gov. Jay Inslee said the decision upheld the principles of representative government. He issued the following statement: “The state Supreme Court did the right thing today in ruling that a supermajority requirement for ordinary legislation would alter our system of government. The supermajority requirement gave a legislative minority the power to squelch ideas even when those ideas had majority support. That is inconsistent with our fundamental form of representative democracy.

“Majority rule is a foundation of our system of government. Alexander Hamilton understood this and warned that giving ‘the minority a negative upon the majority’ would cause ‘tedious delays; continual negotiation and intrigue; contemptible compromises of the public good.’ James Madison understood this. And the framers of Washington’s constitution had vigorous debate on the issue and were deliberate in embedding the principle of majority rule in our constitution.

“Those principles have served the people of Washington well, and I’m heartened that the state Supreme Court acted today to protect our constitution.” 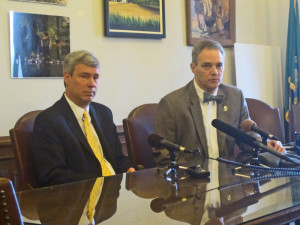 At their own news conference, House Majority Leader Pat Sullivan, D-Covington, and House Appropriations Chair Ross Hunter, D-Medina, downplayed the effect of the ruling on this year’s legislative session. It might be possible to raise taxes with a majority vote – and Hunter maintains it will be difficult to pay the billion-dollar-plus tab for the Supreme Court’s McCleary decision without new revenue – but they said there are political realities to consider. Said Hunter, “It seems like what we are likely to do this year as Republicans control the Senate and Democrats control the House, we are going to come to some combination. This isn’t D.C. We talk to each other. We even occasionally share an adult beverage together, which I don’t think happens in D.C. We will work this out – and they are not super interested in raising taxes.”

Said Sullivan, “I just want to point out that there is not going to be a jump to raise taxes. We are going to look at that same budgetary process that we’ve used since I’ve been here, and go through a thoughtful process of determining where the priorities are, going through the budget line by line, looking for efficiencies.” 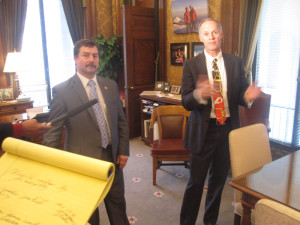 Senate Majority Leader Rodney Tom, D-Medina, said the decision demonstrates the significance of the takeover in the Senate this year by a coalition of 23 Republicans and two Democrats. “If citizens have wondered why the Majority Coalition Caucus is so important, this is why,” he said. “Today’s decision underlies the need for our emphasis on reforms and spending restraint. The people didn’t send us to Olympia to look for ways to tax them more. To solidify our commitment to the voters we are exploring what rule changes we can make in the Senate to guarantee that the will of the people will be respected and that any increase in revenue will require broad bipartisan support and a two-thirds vote in the Senate.”

A few hours after Tom’s statement went out came a response from state Democratic Party Chair Dwight Pelz – whom, it might be noted, has been none-too-pleased with the New Senate Order. “This morning we got some great news!” he exclaimed. “The state Supreme Court struck down Tim Eyman’s supermajority rule, which required a two-thirds vote in our Legislature to raise taxes. For years the two-thirds requirement has handcuffed our state, hitting our education system the hardest. The biggest winners today are our state’s children, who now have a chance for a fully funded education.

“But it didn’t take long for Senate Majority Leader Rodney Tom to act – siding with Eyman and anti-tax forces like the Tea Party. After the ruling was announced, Tom said his Senate Majority is ‘exploring what rule changes we can make’ to bypass the Supreme Court and require a two-thirds vote in the state Senate. If that doesn’t work, his Senate Majority will try to pass an amendment making the two-thirds rule part of the state Constitution.

“We need to find a true Democrat to replace Rodney Tom. Can you donate $5 to our Rodney Tom Retirement Project?”

Will Stand With People

Senate Republican Leader Mark Schoesler, R-Ritzville, said the Senate will make passage of the constitutional amendment a high priority. “The court can rule the way the court decides to rule, but our caucus will stand with the people of this state. Washington voters have repeatedly said that they want to see this basic taxpayer protection kept in place and they want it to be harder – not easier – for their taxes to be raised. The only option that now remains for them is to amend the state constitution and put this issue to bed once and for all.” 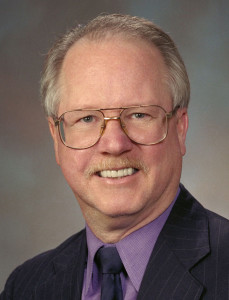 House Republican budget leader Gary Alexander, R-Olympia, said the five consecutive wins for the two-thirds rule demonstrates that voters expect a high threshold for tax increases. “While today’s ruling impacts the law of the land, it doesn’t change the will of the people. As the budget leader for House Republicans, I will continue to forge ahead with our plan to create a sustainable and transparent budget with no new taxes. I believe this is what the people want – a government that lives within its means – despite the court’s actions.

“In the end, today’s ruling shows how important it is to place the taxpayer protections into the state constitution. We have legislation ready to be enacted today – right now. I urge the majority party in the House to join with House Republicans to adopt a new constitutional amendment so that we can, once and for all, put this issue to rest and get on with responsible governing.”