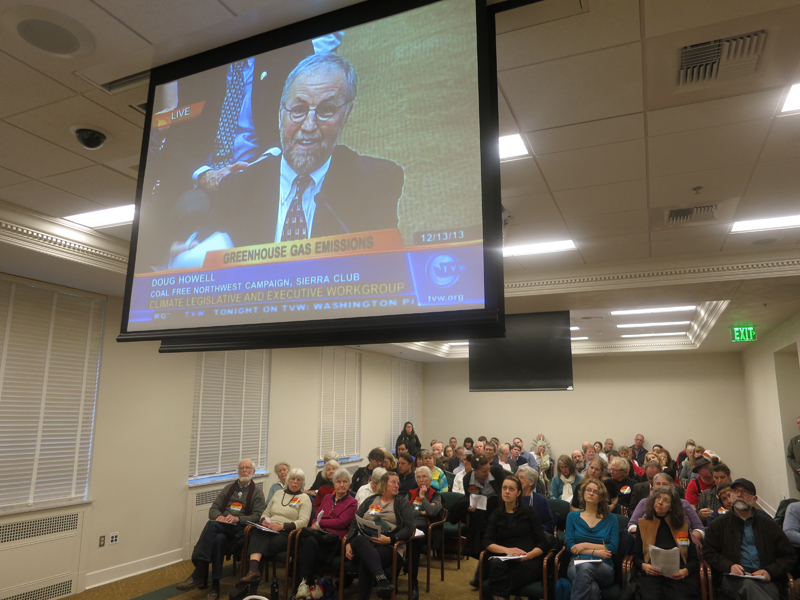 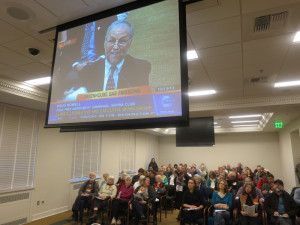 Doug Howell of the Sierra Club’s Coal Free Northwest Campaign testifies Friday on the state’s climate change initiative as an overflow crowd in a secondary House hearing room looks on.

OLYMPIA, Dec. 14.—After months of argument, one new thing came out of the public hearing Friday on the state’s ambitious and rather vague effort to do something about the global climate. In a conflict that seems to be pitting greens against jobs and the economy, labor is taking the side of the environmental groups.

It was all pretty fuzzy, just like pretty much everything else the state is considering in the way of climate-change policy. But at the final public hearing of the Climate Legislative and Executive Workgroup, the state Labor Council appeared to declare that its longstanding political alliance with green groups at election-time now extends to environmental issues. Never mind the fact that the Labor Council has formally endorsed a coal-port terminal at Cherry Point near Bellingham, which would create 5,700 short and long-term union jobs and which environmental groups are doing their darndest to scuttle. Or that individual unions and the Building and Construction Trades Council have endorsed a similar project at Longview.

In a statement from Jeff Johnson that was read at the hearing, the labor council president pointed to the strong ties between labor and environmental groups, and he said the council joins with them in embracing what has become a central element of the progressive agenda. “We recognize that climate change and income wealth inequality are the two great crises that face us today,” Johnson said in the statement. “History will judge us as leaders of organizations by the efforts we make to address these problems. It is my belief that your work can in part address both of these issues. The Washington State Labor Council has been working with our affiliated local unions in statewide blue-green alliances.”

Johnson’s statement went on to endorse low-carbon fuel standards – one of several highly controversial proposals that are being contemplated at present by lawmakers and Gov. Jay Inslee. His point was that the brewing of new fuels might create jobs. And while Johnson’s statement was silent regarding coal, an industry on which thousands of union jobs depend in this state and elsewhere, more important was the context in which the statement was delivered. It was the opening statement at Friday’s hearing in a panel arranged by Climate Solutions, which organized testimony in support of the sweeping and as-yet-undetermined environmental legislation. 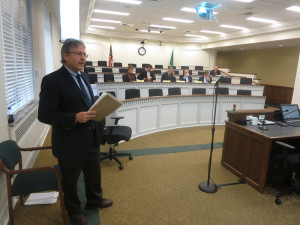 Thus the battle lines are being drawn for a fight likely to be waged for years. Next Wednesday the climate task force is supposed to vote on recommendations for next year’s Legislature, though it seems a foregone conclusion that there will be no agreement. The panel is considering big-picture policies like cap-and-trade, a carbon tax, low-carbon fuel standards, and an expansion of the state requirements forcing utilities to purchase a growing share of their power from wind and solar. Republicans and Democrats each have two votes, a recipe for near-term deadlock. The Republicans agree with the business interests who say it is foolish to move forward unless the state knows how much it will cost – they say the future of industry and agriculture is at stake, and with it thousands of jobs. Democrats, environmental groups and their supporters – and now apparently labor, perhaps with a reservation or two — say the state should move ahead regardless. Hang the cost, declared Roxy Giddings of Parkland. “We need to spend whatever it costs to get clean food, clean water and clean air. We need to pay for it if that is what it costs.”

Cap and Trade Could Cost Plenty 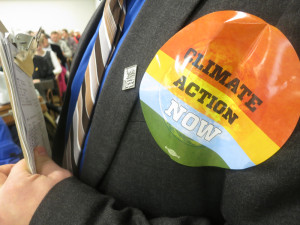 So how much would it cost? About all anyone can say is that a big state effort certainly would be expensive, and whatever impact it would have probably wouldn’t do much for the polar ice caps. This state produces about three-tenths of one percent of global greenhouse-gas output. Both sides laid out formal proposals this week, the Democrats naturally offering the more expansive one, but neither plan takes the form of a bill whose costs and benefits can be analyzed with precision.

Inslee, a non-voting member of the committee who has made climate change his leading issue, was joined by Sen. Kevin Ranker, D-Orcas Island and Rep. Joe Fitzgibbon, D-Des Moines, in offering an ambitious five-point proposal. It would impose a cap-and-trade law like that imposed recently in California, under which the state sets pollution limits for individual businesses and allows them to purchase credits from other businesses that have exceeded their goals. The plan would bar utilities from purchasing coal power from out of state – a big issue for Puget Sound Energy, which is served by the Colstrip Plant in Montana. It also would provide new incentives for energy-efficient construction, the use of clean energy, clean fuels and clean transportation.

Cap-and-trade alone would cost the state anywhere between 41,456 and 81,519 jobs by 2030, says the task force’s consulting firm, the Science Applications International Corp. It would cost the average household between $696 and $8,200 a year. All depends on how it is implemented.

Inslee reiterated his position Friday that the state has to do something. The state adopted C02-reduction goals in 2008, just before the recession – 1990 levels by 2020 – but it didn’t do anything to try to hit the target. So without action the state is certain to miss the mark seven years from now, and the deficit will be even greater when further reductions are required in 2035 and 2050. “The environment will not wait and neither should we,” he said.

Republicans are fond of pointing out that the goals were plucked from thin air during legislative debate five years ago. Their modest proposal says the targets should be “revisited.” Among other things, they say existing state rules forcing alternative-energy purchases should be revised to place more emphasis on conservation – an idea that leaves environmental groups aghast, because it might hurt the market for windpower.

State Sen. Doug Ericksen, R-Ferndale, pointed out that the state already is one of the cleanest in the country, thanks to its dependence on hydroelectric dams for more than 70 percent of its power. If Washington isn’t careful, he says it could impose high costs on business that would place it at a disadvantage with other states. Making big strides here won’t be easy, and could end the low power rates that have encouraged development of energy-intensive manufacturing. “We can’t place Washington state at a competitive disadvantage because of our already low carbon footprint,” he said. “People in Washington state, families that depend on manufacturing jobs here, can’t be asked to sacrifice because we have hydroelectricity.” 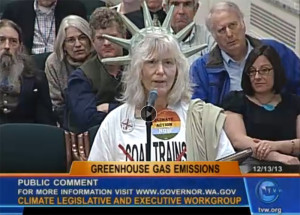 There really isn’t anything new about the argument – it has been sounded dozens of times since the task force held its first meeting. It’s just that Friday the public had its chance to chime in. Environmental groups made a big push to pack the room, and most who attended the hearing wore big stickers declaring “Climate Action Now.” One woman who failed to identify herself wore a tiara fashioned after the Statue of Liberty and carried the Declaration of Independence in the crook of her arm. “The core problem is that we are being controlled by a very small family of bankers and they also own the fossil fuel industries,” Lady Liberty explained. “This is the cat of nine tails they have to enslave the whole world and keep us under control.”

A panel organized by the Association of Washington Business demonstrated just how worried business has become about the environmental crusade. AWB’s Brandon Houskeeper said the report produced by the consultants to the task force did not offer the comprehensive look at climate-policy costs that business had hoped. Yet even the consultants acknowledge that the Democratic proposal would not achieve the 2008 emissions targets. “To that end the question must be asked, how much is the state willing to spend to achieve a portion of Washington’s goals? Before CLEW moves forward with recommendations it must first better understand the cost and impact of the stated goals, especially given the state’s current position as one of the greenest states in our nation.” 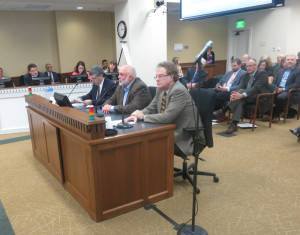 Tim Boyd, representing the Industrial Customers of Northwest Utilities, said that if the state were to impose a carbon tax like that of British Columbia, at $30 a metric ton it would cost electricity ratepayers $600 million a year. At that same rate, Ed Finklea, executive director of the Northwest Industrial Gas Users, said natural gas users would have to pay an additional $406 million a year. Frank Holmes, northwest director of the Western States Petroleum Association noted that low-carbon fuel standards would add about a dollar to the price of a gallon of gas. And Tom Davis of the Washington State Farm Bureau said that anything that boosts the cost of energy is going to boost the price of food – and with no specific proposal on the table, no one knows how much. “It is also not clear how implementing each proposal or proposals collectively will actually make things better.”

But for everyone who sounded alarm, there were a dozen who declared that saving the world was the right thing to do. And in the meantime, they said artificial economic incentives created by the state might create jobs even as others vanish. Take John Plaza, CEO of Imperium Renewables, a Grays Harbor County company specializing in biofuel development, who said low-carbon fuel standards would stimulate a green-fuel industry in this state. He pointed to a study indicating that California’s low-carbon fuel standards have added only an eighth of a penny to the cost of gas in that state. “You will hear dire soundbites from the opposition, but I ask you, review the data. The facts show the truth about the benefits of these policies, both regionally and internationally.” Plaza apparently was referring to an analysis released this month by NW New Energy. The study analyzes fuel prices in California so far, two years after the rules were imposed, but it does not discuss what will happen in 2015 when the Golden State will phase in new, far-more-stringent fuel-content requirements.