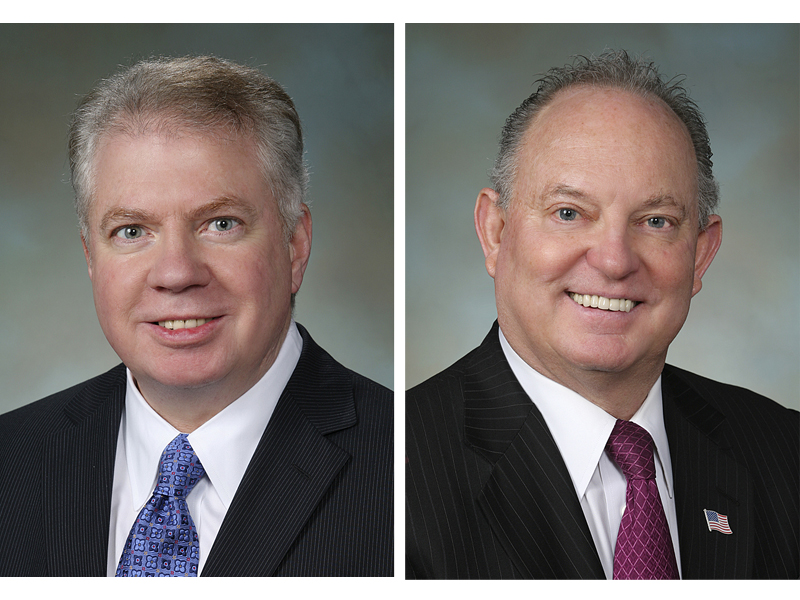 An Olive Branch in the State Senate? – Dems Say They’ll Talk With Republicans About Power-Sharing, if it Comes to That 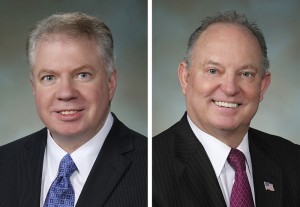 Senate Democratic Leader Ed Murray of Seattle and his temporary Republican counterpart, Mike Hewitt of Walla Walla, who will be replaced at a Wednesday reorganizational meeting.

OLYMPIA, Nov. 26.—Democrats in the state Senate are signaling they’ll cooperate with Republicans if they have to. Without making specific promises, a letter from Senate Democratic leader Ed Murray appears to say his team won’t dig in its heels and fight to the death if there is no way it can actually win.

The letter to Senate Republicans, released just before the Thanksgiving holiday, says the Democrats will be happy to sit down with the Republicans and negotiate a leadership arrangement. Once Senate Republicans designate a new caucus leader Nov. 28, Murray writes that the Dems hope to “negotiate a clear administrative process going forward.”

The letter stops short of promising a power-sharing arrangement with the Republicans, but that’s really what it’s about. Right now it appears Democrats will have a 26-23 advantage in the Senate next year. Normally that would give them the ability to call all the shots – naming a majority leader, awarding committee chairmanships, deciding which bills live and which bills die, and most important, writing a budget all by themselves without input from the other team. But there are deep divisions within the Senate Democratic caucus, and two Democratic members, Tim Sheldon of Potlatch and Rodney Tom of Bellevue, say they will vote for a rule change that would force their party to share power with the Republicans. With a narrow majority, two votes are enough to turn everything upside down.

The Murray letter offers a somewhat delicate response – not quite addressing the matter head-on, but pledging to keep communication open. And that might be the most appropriate thing to say at the moment. The votes are still being counted in Vancouver’s 17th Legislative District. With only a couple hundred ballots likely left, Republican incumbent Don Benton, the sitting senator, is ahead by 104 votes. At this point the count is unlikely to change the outcome of the race, but still a recount is certain, and that will not begin until Dec. 4.

Meanwhile, Senate Republicans still must appoint a new leader of their own. Senate Minority Leader Mike Hewitt, R-Walla Walla, says he will step down from his leadership position when Republicans hold their reorganizational meeting Wednesday, though he will remain in the 16th District seat. So right now, it’s not clear who will be speaking for the Rs.

Reading between the lines, Murray’s letter appears clearly to recognize that a new order may be on the way. Such things are highly unusual in the state Legislature. Occasionally there are ties in the state House, but never in Senate, where the two party system and the odd number of members, 49, ensures that one side or the other always has at least a formal advantage over the other. Last year, it should be noted, three Democrats bolted and voted with Republicans for a budget bill, essentially changing control of the chamber during the Legislature’s final weeks. But by calling for a bipartisan majority caucus from the start, Tom and Sheldon are forcing the two parties to cooperate in a much more formal way than in the past. Tom and Sheldon say they will vote for a rule change the opening day of the 2013 session that will require leadership decisions to be made by the full Senate, requiring Republican participation. Currently leadership decisions are made by the majority party behind closed doors.

Here’s what Murray had to say:

“The Senate Democratic Caucus stands ready to work with your leadership team, and the entire Republican caucus, to fulfill the Senate’s constitutional responsibility along with the governor and the House to govern. Our own caucus has elected me its leader and we are in the process of electing the rest of our leadership team and completing our committee recommendations. We will gladly share it with you after our caucus approves it. In the recent past, our respective caucuses have set new standards of bipartisan cooperation. We remain committed to working with Senate Republicans in a manner that will reflect the priorities and values of our state. We are committed to finding a path forward and to working collaboratively, regardless of changes that create or dissolve majorities now or in the future.

“Once you have completed your reorganizational process, which we understand to be scheduled for Nov. 28, we request Republican leadership meet with Senate Democratic leadership to negotiate a clear administrative process going forward and to fulfill your shared responsibility to govern. Our goal is to recognize the fluid nature of the Senate at present and to govern accordingly.

“I personally look forward to working with you and the citizens of our state as we work for the best interest of Washington.

“On behalf of Senate Republicans, thank you for your Nov. 20 letter stating your readiness to work with our team and our caucus.

“We remain committed to reaching bipartisan solutions to the issues that concern the people of Washington, including a sustainable budget, job creation and efficient delivery of services. Recent Senate history has shown how a shared responsibility can produce positive results, such as the constitutional rainy day fund, changes to our workers’ compensation system and the additional important reforms adopted just this year.

“Congratulations on your recent election to lead the Senate Democratic Caucus. Although I will not be your counterpart in the coming session, I look forward to continuing to serve with you in the Legislature.