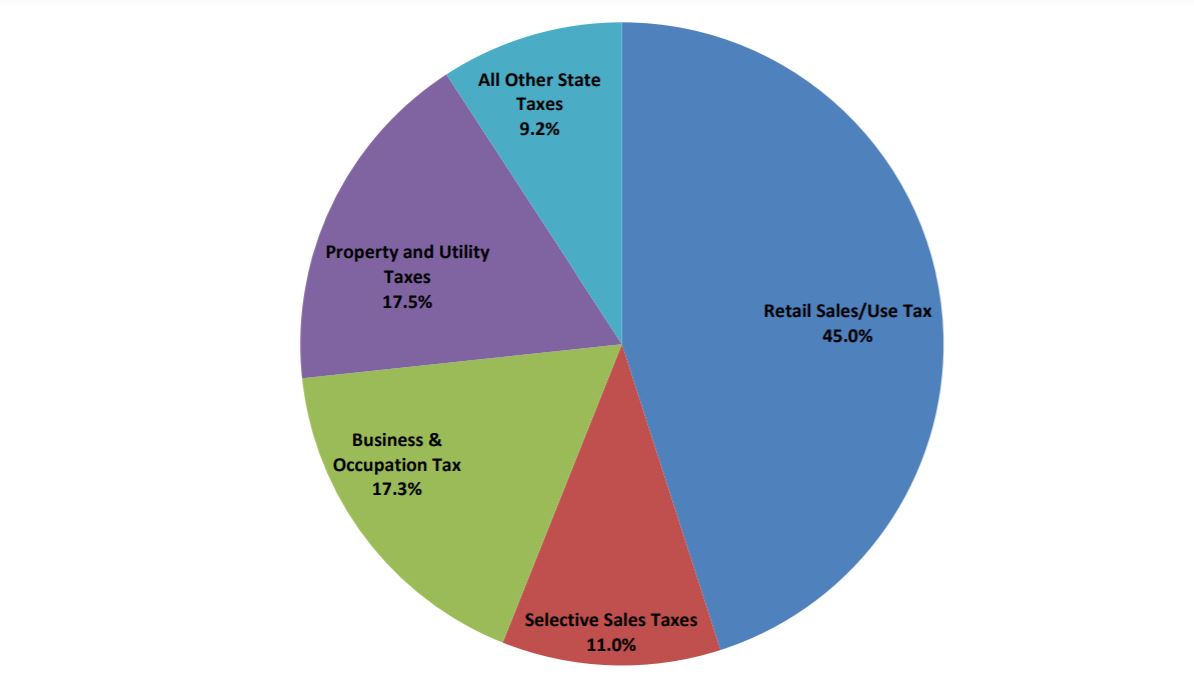 Am I taxed too much? Understanding the impacts of fiscal policy

This week, our team at the Wire is publishing a series of stories on what the K-shaped recovery looks like. Part of the idea is that by telling the stories from the recovery, we can better inform policy making that is trying itself to respond to the nature of our pandemic economy.

So, as part of this reporting, we wanted to start with a simple question as fiscal policy gets hammered out in Olympia:

As a Washington State resident, am I taxed too much or not enough?

We’ve spent a lot of time talking with folks and reviewing the data. After sifting through it all, we think we have found an unequivocal answer to this question, and it is this:

Here’s how we approach an answer to this question, which we do in two parts.

Part 1 is a review of the idea of regressivity versus progressivity in fiscal policy, and how the taxes on which we rely to fund Washington State government impact individuals based on their income.

Part 2 puts this structure in context with other states with the idea that we can learn something about our burden as taxpayers by looking at how other states answer the same question.

First, the primary tax revenue tools in Washington State come in the form of a sales tax and a property tax. The business and occupation tax is another. A gas tax is another important revenue source.

Now, a tax is considered regressive or progressive based on the financial burden to an individual or cohort relative to their income.

Taxes that create tax burdens that have unequal shares are either more regressive or more progressive based on the direction that burden shifts.

Except we see that as income increases, a lower share of income goes towards taxable expenses. At upper incomes, individuals don’t spend all of their money on items that face a sales tax. They put some money in savings. They invest some money for retirement. Maybe they buy a house or put some money to pay down debt.

I’ve made this hypothetical, but you know this in your gut. You can also see this in national data on how spending compares by income.

One lesson is this: whenever you see a sales tax, it is likely regressive. It will almost always hit lower incomes with a higher tax burden as a share of income than it will hit upper incomes.

A property tax turns out also to be regressive, though less than the sales tax. Let’s imagine a property tax rate of 1% of the assessed value of a property.

This .5% may not seem like much. But the gap widens at higher incomes. Imagine a person with $5m in annual income. Maybe this person owns three homes — make it four. Let’s say each is about 5,000 sq feet, and they average about $3m per home.

Let’s look at another tax that Washington State relies heavily on: the gas tax.

Arguably, this is a use tax, or a tax on folks who choose to use gasoline as part of their lifestyle. But, the folks who end up driving the most or end up relying on transportation the most are folks at the lower end of the income bracket. They may use gasoline not as a choice, but as a matter of survival.

Here is one way that shows up.

It turns out poorer neighborhoods generally have fewer jobs and less economic opportunity than richer neighborhoods. Residents in these high poverty areas need to drive or get transportation a farther distance than other folks with higher incomes.

This is particularly true in the Seattle metro area where the number of jobs near high-poverty neighborhoods is a stark 54% lower than the national average across 96 metropolitan areas, according to a study from the Brookings Institute.

In short, lower income folks often have to drive more to get to their jobs, which uses more gas, which requires payment of more gas tax.

Finally, a quick review of the business and occupation tax which Washington State relies on also shows it is regressive.

The B&O tax taxes all gross revenue rather than profits. So, if a company is making $1m in gross revenue, they will pay a B&O tax whether they are hemorrhaging losses or enjoying profits. Rich and poor are taxed alike based on their revenue. But, gross revenue isn’t net revenue, and it’s net revenue that is the thing we look towards to measure money in a business person’s pocket. So, if money-losing businesses have the same tax rate and highly profitable businesses, you can see how the burden will fall unequally as a share of the income, or net revenue.

There is an important distinction here in practice that actually underscores the point.

In practice, B&O rates are set through legislative action. And, so, those voices that have more access to policy makers may be able to shape B&O tax policy to the advantage of the voices they represent. This isn’t a bad thing, per se. It’s the legislative process at work.

But, poorer business voices are less likely to have advocates in the legislature. More highly profitable businesses are able to secure stronger advocates, and perhaps more likely to win concessions in the form of lower B&O tax liabilities.

For example, in 2004 Boeing lobbied for and won a B&O tax break that saved them 40% off of their B&O tax burden. However, the approximately $118m in annual benefit was too much even for the WTO, which forced a repeal of the tax benefit in 2020.

However, today the primary B&O tax rate for most businesses stands at 1.5% of gross revenues. The B&O tax rate for manufacturers is more than 2/3rds off that rate at 0.484%. In practice, both in application and as a result of the legislative process, the B&O tax ends up being regressive as well.

With this baseline knowledge, let’s now look at how this gets applied to individuals throughout the modern economy of Washington State.