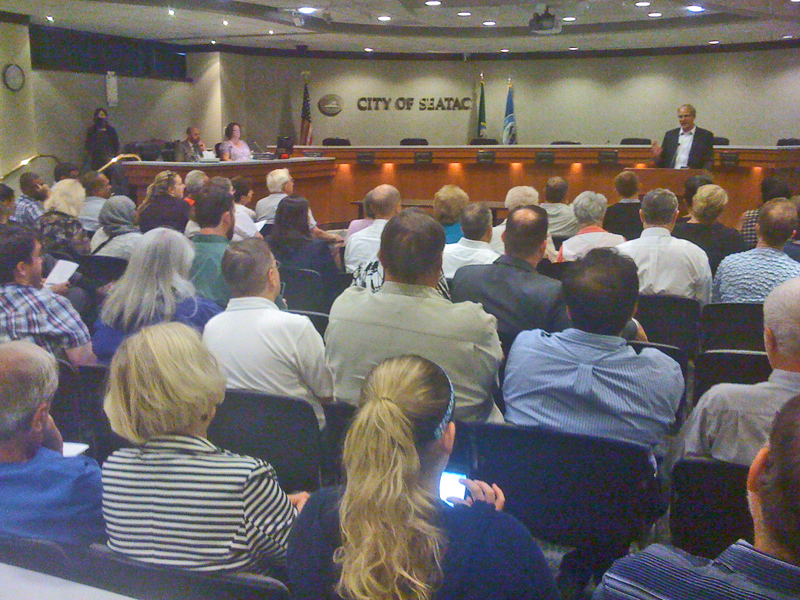 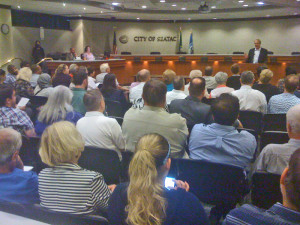 SEATAC, July 17.—In yet another indication that a local ballot initiative in this small King County city carries statewide and even national significance, Alaska Airlines and the Washington Restaurant Association have filed suit to block a measure imposing America’s highest minimum wage on Sea-Tac International Airport and nearby airport-related businesses.

So it seems this small city of 27,000 has become the most important battleground this year in a national fight by labor interests for a $15-an-hour minimum wage, paid sick leave and other rules. Odds are such proposals would never stand a chance in a typical state legislature, but by fighting city by city, in selected locations where local sympathies tip the scales, labor has scored big victories. They have come in places like Seattle, Los Angeles, San Francisco and Long Beach. The SeaTac initiative is the most sweeping proposal yet, and it is a big worry for business, says Bruce Beckett of the state restaurant group. “We seem to be heading toward a patchwork here that doesn’t bode well for people who are thinking of bringing businesses into this state,” he said. “And it is just an unworkable piece of policy.”

The battle is heating up at a time when it is becoming increasingly likely that voters in the city of SeaTac will see the ‘Good Jobs Initiative’ this fall. Activists working on behalf of Working Washington, a union-and-activist group backstopped by the Service Employees International Union, turned in 2,506 signatures last month, more than enough to qualify the measure for the ballot. Last week the SeaTac city council decided not to pass the initiative on its own, making it all but certain that the measure will go before voters. The council will vote July 23 to place it on the ballot, apparently a formality. Alaska Airlines and the Restaurant Association are seeking an injunction that would keep it from the ballot; the suit is due for a hearing in King County Superior Court on Friday. The matter has left the city’s business community in an uproar. A town-hall meeting on the matter in the city of SeaTac Tuesday night drew a standing-room-only audience, and local business interests announced they are forming an opposition group, Common Sense SeaTac. 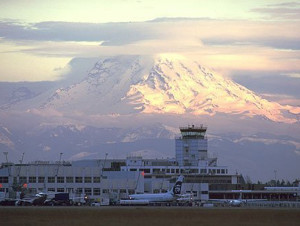 You might call the SeaTac initiative a catch-all proposal that includes just about everything that has been proposed by labor activists and progressives in recent years. It would impose a $15-an-hour minimum wage at the airport and on certain specific businesses related to airport traffic, the ones located near the airport on the Highway 99 strip – hotels, parking facilities and rental-car outlets. The $15-an-hour wage would top the Washington state minimum wage, now highest in the country at $9.19 an hour, by some 63 percent. It would affect as many as 5,000 workers, and the wage would be increased annually at the same rate as the consumer price index for urban wage-earners and clerical workers, the fastest-rising of the measures maintained by the Department of Labor. The initiative also would require airport concessionaires and other businesses to provide paid sick leave. And it would establish “successor employer” rules that would require businesses to rehire employees when a business changes hands or an old concession contract is replaced by a new one. The proposal allows exceptions only when a collective bargaining agreement is in place, meaning that it would give employers an incentive to sign union contracts to achieve more advantageous terms.

The SeaTac initiative has roots that go back eight to ten years. In 2003 the airport ditched its old master contract for food services and began bargaining with individual businesses. Workers were displaced as new contracts were negotiated. In a separate issue, Alaska Airlines ditched nearly 500 baggage handlers when it went with an outside contractor in 2005, saving a bundle in the process, while labor howled that high-wage union workers were being victimized. The battle moved to the Legislature when labor sought a bill that would require successor employers at the airport to rehire workers. That multi-year effort wound up fizzling two sessions ago, but the rather different sort of campaign playing out at the municipal level appears to have been in the works for quite some time. A labor-backed slate of city council candidates won three seats in 2011, just shy of a majority on the seven-member council.

The successor-employer issue appears unique to SeaTac, but the $15 wage and mandatory sick leave have been big issues for labor and allied activist groups elsewhere. Last year they convinced the city of Seattle to pass a controversial sick leave ordinance in the city of Seattle and have now taken that fight to the city of Tacoma. Meanwhile the $15 wage is the subject of a new city-hall campaign in Seattle, and the same issue appears to be a central point in the current mayoral race in the city of Los Angeles. Last fall a similar campaign convinced voters in the city of Long Beach convinced voters to impose mandatory sick leave and a $13 minimum wage on hotels of more than 100 rooms.  The vote prompted some hoteliers to lay off workers and scale back to 99 rooms. 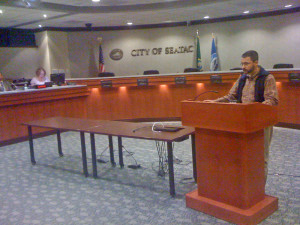 Advocates are calling their living-wage campaign a matter of social justice. And if the initiative singles out airport workers rather than the populace as a whole, they say it’s a good place to start. At the very least, the airport generates enough business that it can afford to spread the wealth. “People fly into Sea-Tac because they want to come to Seattle,” says spokeswoman Heather Weiner. “These people are not going to stop coming to Sea-Tac and instead fly into Bellingham.”

It is a campaign that claims the moral high ground. Among those speaking at Tuesday night’s meeting was the Rev. Dick Gillette, a priest at St. Andrew’s Episcopal Church in Seattle. No need for profits to be too high, he said. “You can still be close to the market, make enough profit and be moral leaders as well,” he said.

Providing the intellectual heft is an organization called Puget Sound Sage, which has documented other airport minimum wage campaigns in the West. Although the $15 an hour is considerably higher than in other states and cities – San Francisco has the highest minimum wage nationally at $10.55 – some airport governing bodies have imposed higher wages. At Los Angeles International Airport, the minimum wage is $15.37. Key difference is that those wages do not apply off the airport premises, as they would in the city of SeaTac.

“The airports with the highest living wages, LAX and San Francisco, have grown substantially in passengers since the adoption of good standards, despite competition from other airports in the region, which SeaTac does not have,” said Howard Greenwich, Sage’s research and policy director. He noted that the Los Angeles city council in 2007 imposed a minimum wage that now amounts to $12 an hour on certain large airport-district hotels. “As a result, no hotels have moved or closed,” he said. “Meanwhile, in all these cities and airports, thousands of workers are spending their increased paychecks in local communities and supporting local businesses and tax revenues.”

Heading it Off in Court 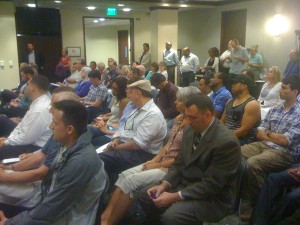 The lawsuit, filed last week, aims to head off the initiative before it reaches voters. Arguments include one that has doomed many an initiative in this state. The suit contends the measure deals with more than one subject, a practice forbidden by the state constitution. It also claims that an insufficient number of signatures were submitted. More than one-third of the signatures were disqualified by the King County elections office, an unusually high percentage, and while 1,780 were deemed valid, the suit maintains that another 266 should have been tossed. That would put the initiative just below the 1,566 signatures required for a position on the ballot.

But perhaps most intriguing is an argument that takes a stab at labor’s city-by-city approach. Alaska Airlines argues that as a common carrier it is governed by the Railway Labor Act, as well as by the National Labor Relations Act – both of which supersede any local initiative. The before-the-fact lawsuit might seem at odds with Washington state’s hands-off policy when it comes to prior legal review, but it should be pointed out that Washington law treats municipal initiatives differently than statewide measures. The law requires cities to assess their legality before placing them on the ballot. Thus the last big argument: The suit also contends that the city of SeaTac failed to perform an adequate legal review. “The lawsuit requests clarification on the initiative that would directly affect our business and many others in the city and at Sea-Tac airport,” Alaska Airlines offered in a statement. “On behalf of our employees, passengers and shareholders, it is imperative that sufficient due diligence is conducted to understand the potential ramifications of this initiative.”

Not Waiting for Judgment 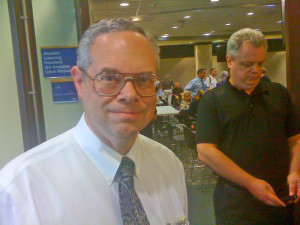 Meanwhile, business interests in the city of SeaTac aren’t waiting for the courts to rule. They have formed an opposition campaign calling itself Common Sense SeaTac – a coalition of concessionaires, hotel operators, parking lot owners and other business interests. The effort is being promoted by Gary Smith and partner Don Stark — not to be confused with the Gary Smith who lobbies for the Independent Business Association in the Washington Legislature, and who also testified against the measure at Tuesday’s town meeting. “We represent all walks of life in SeaTac,” said Scott Ostrander, manager of the Cedarbrook Lodge in SeaTac. “We represent the working, the retired, the taxpayers, businesses covered by the initiative and businesses not covered by the initiative, as well as a lot of employees who live in the city. …We know that anything on the surface that appears to be too good probably is too good. A proposal that imposes a 63 percent increase in wages, above and beyond the state minimum wage, which is the highest in the nation, and which is 54 percent higher than the highest municipal minimum wage in the United Sates, which is San Francisco, has a lot of unintended consequences.”

Among them, no new investment, business leaders say. Probably restaurant closures, maybe room closures too. As in Long Beach, the initiative applies only to hotels of 100 rooms or more, and so the same dodge could be used here. Some hotels considering expansion have been put those plans on hold, they say. The initiative could force them to hike room rates or cut staff, either of which might send guests scurrying toward more hospitable hospitality in Tacoma or Seattle. “This initiative threatens all of us,” said Frank Welton, manager of the Doubletree Hotel. Take the increase in mandated wages. “I’ve never heard of anything like that. I think it is horrible for the authors of this initiative to pretend they know how it will affect the businesses in this community – do they get copies of our financial statements? Do they know how difficult it is to stay competitive and make it work?”

Airport food concessionaire LeeAnn Subelbia, who has joined the suit as a business plaintiff of behalf of Filo Foods and BF Foods, said the measure will force some smaller businesses to lay off workers or shut down entirely. “There is no way a small company will survive the requirements of this ordinance.”

SeaTac councilman Rick Forschler, who took an early role in organizing business opposition, said the local business community has taken up the charge and made it its own. “I’m just hoping we can find some way to end this,” he said. “It would be nice if we could get it over before November, because it is just going to be a lot of grief between now and then.”