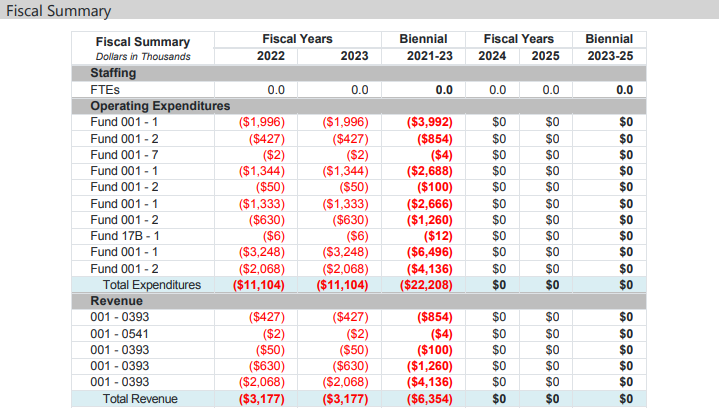 In response to the economic downturn set in motion by COVID-19, OFM in May directed state agencies to identify options for reducing their general fund spending by 15% for FY21 appropriations. OFM also directed agencies to be prepared to propose spending reductions in their 2021-23 budget proposals.

The Wire looked at the proposals submitted by the Washington Health Care Authority (HCA) and the Department of Children, Youth & Familes (DCYF) – two agencies where spending reductions directly impact the most vulnerable and economically disadvantaged.

To prepare for a potential 15% budget reduction, HCA is proposing a series of cuts, many of which involve the elimination of optional Medicaid benefits.

In one decision package, HCA proposes the elimination of adult dental services under Medicaid. Cutting adult dental would result in $26.6 million in general funds savings for the biennium, but would cause nearly 1 million Medicaid members to lose their dental benefit.

These individuals come disproportionately from marginalized communities and include significant portions of adults from communities of color, adults with chronic health conditions and older adults,” reads the decision package description.

HCA says they are limited in the areas where they can make reductions, as many Medicaid services are federally required.

It was painful, as you might expect,” said DCYF Secretary Ross Hunter of the budget submission. “We expect, and are ready to help the state address, a worldwide pandemic and the resulting economic downturn. What we’re worried about is the sadly predictable increase in severe child abuse that we have seen after every other significant economic disruption in the past few decades.”

According to Hunter, much of the savings came from a declining caseload in foster care. DCYF set a goal of decreasing the caseload by 50 percent over five years. In the first year of this effort, Hunter said the agency has seen a 15 percent decrease.

Broken down across DCYF, the proposed spending reductions consist of holding non­essential positions vacant through an agency ­wide hiring freeze; a 10 percent reduction in travel, with the exception of social workers and licensing staff; a 10 percent reduction of supplies, maintenance, printing, and training; a 10 percent reduction to personal service contracts; and a continued delay to implementing OFM’s ­mandated cost of living adjustment increase for some services and personnel in response to the state’s budget shortfall.

DCYF also submitted several proposed increases, which Hunter writes will be necessary for reducing long-term costs and shoring up the childcare system for adolescents.

The pandemic has exposed a childcare system that does not work well for families in Washington. Safe childcare is inherently more expensive than most families not in the top 25-30 percent of the income distribution can afford. While I do not believe that we should create a shadow childcare system to replicate the K-12 system, many families are unable to afford the level of care they need to be able to go back to work,” wrote Hunter.

One of the increases proposed by DCYF include more funding ($6.9 million GF) for behavioral health and substance use disorder treatment for individuals moving through the Juvenile Rehabilitation (JR) system.