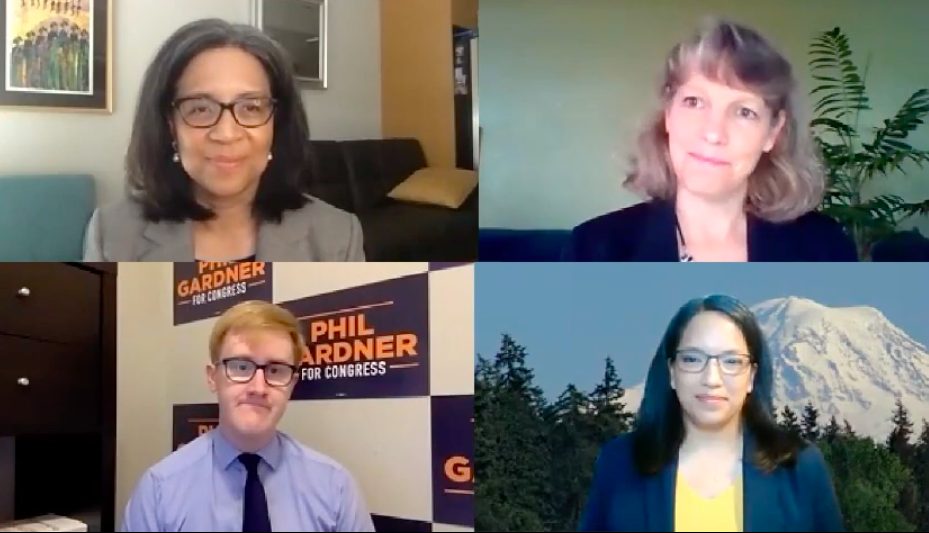 During a 10th Congressional District Candidate Debate this past Wednesday night, Phil Gardner alleged that three of his opponents are soliciting support from Super PACs through the use of a practice called “red-boxing”.

A little over 20 minutes into the debate, Gardner was asked a question regarding the federal deficit and debt. After offering a brief answer to the question, he pivoted to criticize three of his fellow Democratic candidates, Representative Kristine Reeves, Mayor Marilyn Strickland, and Representative Beth Doglio for “exploiting a notorious loophole created for candidates supported by Super PACs.”

Gardner, a former aid to 10th Congressional District incumbent Denny Heck, introduced the critique by saying that the presence of Super PACs and dark money in politics stands in the way of political progress. He then offered his definition of red-boxing.

“Here’s how red-boxing works. A candidate posts on their own website, inside of a red box, a detailed instruction manual for a Super PAC. Then the Super PAC reads those red boxes and spends their unlimited dark money as instructed,” said Gardner. “If this were done in secret, it would be illegal. But since it’s being done online out in the open, candidates can get away with it. And sadly, all three of my Democratic opponents have these red boxes on their websites.”

Equipped with printed copies of pages from Reeves, Strickland, and Doglio’s websites, Gardner pointed out the explicit portions he alleges are instructions for Super PACs, or “red boxes”.

The logic of red-boxing is that by publishing communications suggestions on a public domain, such as a campaign website, candidates can evade campaign finance rules which bar coordination between campaigns and outside groups, most notably Super PACs.

Super PACs are distinct from traditional PACs in a few key ways. First, Super PACs may receive unlimited contributions from individuals, corporations, labor unions and other PACs. Unlike traditional PACs, they are barred from contributing directly to a candidate, and may not coordinate with a candidate in making expenditures.

As defined by the FEC, an independent expenditure is an “expenditure for a communication that expressly advocates the election or defeat of a clearly identified candidate and which is not made in coordination with any candidate, or his or her authorized committees or agents, or a political party committee or its agents.”

Traditional PACs, by contrast, are subject to explicit limits on how much money they can accept and how much they can spend. There is a $5,000 limit on how much PACs may receive from any one individual, PAC or party committee per calendar year. A multicandidate PAC (not established by a corporation or labor union) may contribute up to $5,000 per election to a candidate and $15,000 to a party committee, according to the Campaign Legal Center.

Gardner asserted that the language in these red boxes (blue in Strickland’s case) are designed to read as an instruction manual for the content of political ads, and the voter demographics to be targeted with those ads.

The portions above from the Reeves, Strickland, and Doglio campaign websites each begin with a sentence stating what information certain voter demographic should “read”, “see”, or “understand” about the candidates.

When asked by the Wire whether he could point to any ads supportive of the Reeves, Strickland, or Doglio campaigns that have already been run mirroring information from these “red boxes”, Gardner’s campaign manager, Spencer Dixon, said he hadn’t identified any yet.

Nevertheless, Dixon said that the motive in Gardner raising the issue was to prevent super PACs from getting involved in the race in the first place.

The only reason candidates have these pages is to solicit support from super PACs. As you may see on Mayor Stickland’s page, for example, she has a b-roll video for her super PACs to use in an ad. There would be no use for a silent video to an ordinary voter. The only reason it exists is for the use by super PACs in future ads,” said Dixon.

The “media kit” page on Strickland’s website does contain a 56 second youtube video titled “Strickland B-roll”. However, it is common practice for a political campaign to include a media kit on their website to be used by journalists and others covering the campaign.

Super PACs and any individual on the internet share equal access to the information published on a campaign’s website. But critics of red-boxing, like Gardner, allege that the type of content contained within red boxes on campaign websites indicates that they are meant to be used by outside groups with the capacity to produce ads, not individual voters signaling their support on social media, for example.

During the debate, Gardner pointed to the following language on Doglio’s website as evidence of red-boxing: “Likely primary-voting Democrats/Independents who are female, progressive, under 40, or over 60 need to read and see — particularly through digital mediums first (not including Facebook) — that Beth Doglio is endorsed by…”

The moniker “red-boxing” also allegedly indicates a core purpose of the tactic. The explicit and consistent nature with which information in red boxes is displayed is meant to act as a code for outside groups, according to some. In other words, when a red box is displayed on a campaign’s website, the content contained within it is assumed to be fodder for political admaking.

Gardner’s website contains a wide array of information about his personal history, record, policy positions, and political values. Hypothetically, an outside group could use this information to inform an ad they wanted to produce on his behalf.

But critics of red-boxing would allege this is different because the information is written using language more clearly addressed to individual voters. Also, the information is not displayed within a literal box, red or otherwise. The alleged subtext of the red box format has been reported on in the past.

There is recent precedent laying out how closely ads can mirror information contained on campaign websites.

In 2014, an FEC complaint was filed against US Senator Jeanne Shaheen and the Senate Majority PAC due to similarities between information posted on Shaheen’s website and an ad produced by an outside group. The FEC subsequently ruled that the outside group didn’t violate campaign finance laws, and according to Politico’s reporting, “specifically said communication resulting from use of publicly available information on a candidate’s website was not enough to violate conduct standards for coordination.”

When asked by the Wire in an email about the portion of her website in question, Doglio restated her commitment to rejecting corporate PAC money and pointed to her list of progressive endorsements.

Unlike the major opponents in the race, I’m proud to run a campaign that isn’t taking corporate PAC or fossil fuel money — we are powered by people, with over 6,000 individuals to date supporting our movement with donations,” said Doglio. “We have the support of progressive groups, labor unions, and environmental organizations who often use the power of their grassroots supporters to challenge the status quo and push for big, bold change. I welcome the support of those groups as we fight for Medicare for All, the Green New Deal, and the other progressive priorities of our time.”

Doglio also called for her opponents to join the #StopHateforProfit campaign by not advertising on Facebook.

The Reeves and Strickland campaigns did not respond to requests for comment.

Last quarter, Reeves led the race in fundraising, bringing in about $274k. Strickland and Doglio trailed closely behind with fundraising totals of $251k and $239k respectively. Gardner raised just under $109k. The second 2020 FEC quarter ended on June 30th, though reports are not yet available.

According to a database operated by the Center for Responsive Politics tracking Super PAC spending in the 2020 election cycle, no Super PAC had spent money in this race at the time this article was published.