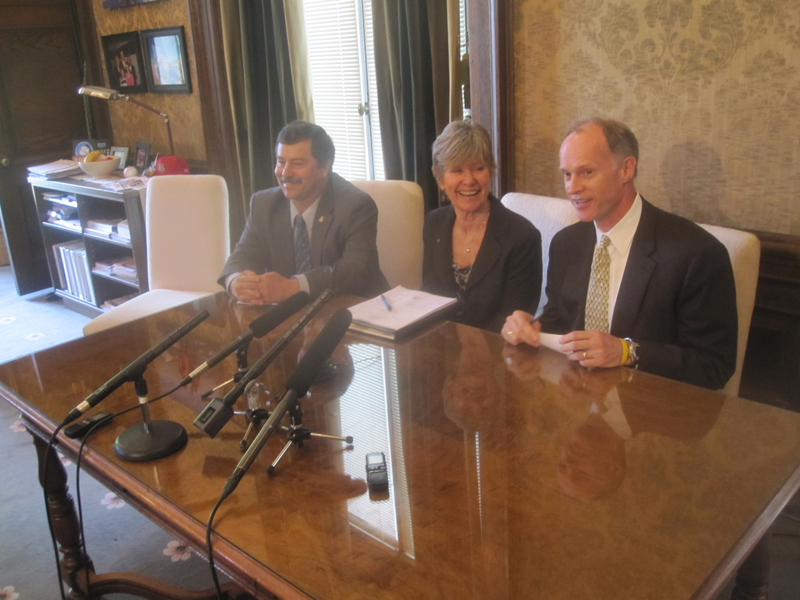 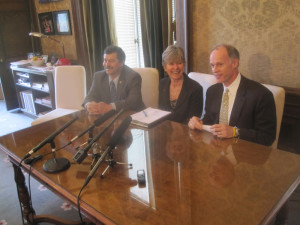 OLYMPIA, June 18.—Some $321 million landed in the Legislature’s lap Tuesday and suddenly the world of the statehouse was turned upside down, all over again. In one of the canniest chess moves of a session that has been marked by brilliant strategic plays on both sides, the Majority Coalition in the Senate Tuesday offered the House a go-home deal.

If the majority Democrats in the House are willing to give up on taxes, the largely Republican Senate Majority Coalition says it is willing to give up on its big reform bills. And now Gov. Jay Inslee, House Speaker Frank Chopp and his House Democrats have a mighty tough decision to make. Will they hold firm on tax increases and risk a shutdown of state government on July 1?

“So they are going to shut down state government for tax exemptions?” asked Senate Majority Leader Rodney Tom, D-Medina. “Certainly with $320 million on the table, and us taking all the reforms off the table, we can get out of town.”

It was an ironic turn of events at the statehouse, triggered by an unexpectedly good pair of forecasts – one for tax revenue and one for caseloads. Together they have given lawmakers an additional $321 million to play with as they write a budget for 2013-15. With a bit of dickering and nipping and tucking, that just might be enough to bridge all differences between the House and Senate and avoid any further talk of tax increases. It also would prevent the shutdown of state government that will come if the Legislature fails to adopt a new budget before the start of the new biennium on July 1.

This is what makes it so ironic. Just last week, Gov. Jay Inslee accused Senate leaders of holding the state hostage for an “ideological agenda” of state-government reform. The Senate’s short list includes two bills on education reform, one that aimed to reduce the cost of the state workers’ comp program, and one that aimed to clamp down on the growth of non-education spending so as to steer more money toward schools. Republicans maintained that if government reform was an ideology, so was the Democrats’ insistence on tax hikes. And now that the Senate says it is willing to give up on the reforms, Democratic leaders at the statehouse, Inslee among them, must decide whether their own agenda of tax increases is worth keeping the Legislature in session – possibly beyond the Washington-state drop-dead date.

There was no answer from the House Democrats Tuesday. In a carefully worded statement, House Majority Leader Pat Sullivan said the $321 million isn’t enough to end the argument. “It certainly doesn’t solve all our budget problems,” he said. 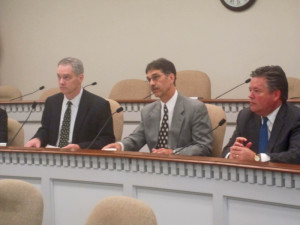 The news about the budget was one of the more unexpected turns of events at the state Capitol this year. For weeks the smart money has held that the June revenue forecast would bring the state only a modest amount of new revenue, and whatever money it delivered would be largely wiped out by increases in the student population, prisons and other state caseloads. Turned out the crystal balls were cloudy. At the quarterly meeting of the Economic and Revenue Forecast Council, state economist Steve Lerch said the state has shown modest economic growth since his last forecast in March. Auto sales are up, the housing market is on an upswing, and the labor market is improving. And so his forecast – the official prediction on which all budgeting is based – added $231 million to state coffers.

Technically that is split between two budget periods, $110 million for the current 2011-13 budget period and another $121 million for 2013-15. But because the current spending plan was adopted long ago and is essentially fixed, it really means lawmakers will have an extra $231 million to spend in their next budget. That means tax revenue rises to $33.6 billion for the next biennium, and it might even be counted as $33.7 billion because all that new tax money will be pushed forward.

But that’s just the start. The caseload forecast delivered another $90 million. So that’s another $321 million for the Legislature to spend. And from there spring all the political arguments that consumed the Legislature for the rest of the day. 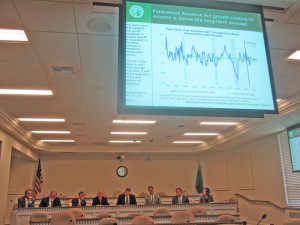 At the morning meeting of the Economic and Revenue Forecast Council, budget-writers agreed the new money makes their task a tad bit easier. Said House Appropriations Committee Chairman Ross Hunter, D-Medina, “it probably closes the gap a little bit. We are working at the margin here – I expect us to negotiate a budget relatively soon.”

And Senate Ways and Means Chair Andy Hill, R-Redmond, said, “I think it is good news, and we should be able to wrap things up and not shut down the government. I’ve always said I did not think that was an eventuality.”

They didn’t get much more specific than that. The closed-mouthed budget-writers maintain they are trying not to do their negotiating in public, despite the unusually public moves each chamber took at the beginning of the month to place their budget proposals on the public stage. The House and Senate in turn passed budgets demonstrating they are remarkably close in terms of overall spending levels – perhaps no more than a couple hundred million apart. The House proposed closing the gap with a highly controversial measure that would have ended or narrowed about $200 million in tax exemptions. But with the Senate’s go-home offer Tuesday, the ground has shifted once again.

The Senate’s offer changes everything. For weeks the assumption has been that the Senate would hold out for reforms, the House would hold out for tax hikes, and either people would find a way to compromise or else there would be no budget and state government would hit a brick wall. But now it doesn’t have to come to that, Senate leaders say. With the additional $321 million in tax revenue and another $160 million in revenue that will come as the result of an estate-tax bill passed last week, they say there is $480 million in new revenue to play with. They note that back in April, the Senate passed a no-new-tax budget with bipartisan support. And while there is considerable argument with the House about whether the Is were dotted and the Ts were crossed, the Senate leaders say the additional half-billion dollars ought to be more than enough to settle arguments. Majority Leader Tom said the reform issues won’t be going away, and lawmakers can consider them the next time they come to town. “Absolutely our steadfastness for the reforms remains true, but as far as the deal for additional revenue, we kind of had Christmas in June, so let’s do the people’s business, wrap this up and move forward and continue those discussions next year,” he said.

The Senate coalition is backing off two tax proposals its leaders appeared to embrace June 8. One is a complicated telecommunications deal that aims to forestall lawsuits by providing equivalent taxation on all forms of telephony. The other would make it more difficult for Oregonians and certain other out-of-state residents to qualify for a sales tax exemption, by requiring them to apply to the Department of Revenue for refunds, rather than by displaying a driver’s license at the cash register. Together those two measures would have raised $135 million. No need for them now, Senate leaders say, now that there’s a half-billion more to spend.

Of course, if the House wants to bargain for those taxes, Tom said the Senate would be happy to swap some of its reform bills. Take workers’ comp, for instance. “If they truly want to move Washington’s employment situation forward, we can have that discussion as far as the telecom and the other out-of-state tax.” But the tax-exemption bill? Forget it, he said.

As for negotiating a budget, the Senate leaders said there are two basic principles on which they will insist: They want $1 billion to implement the Supreme Court’s McCleary decision, and no tuition hikes at the state’s colleges and universities. “Here is a number that I think we all should remember — 1986,” said Senate Republican Leader Mark Schoesler, R-Ritzville. “1986 was the last time that families in this state did not have a tuition hike… This news today makes that a reality that can happen. It can really happen now, that that tax on all the middle-class families of the state, that have been going on since any of us were here or thought about being here, could actually stop. That is a great number.”

The Senate leaders said that if the House goes along with the plan, lawmakers could be done with the year’s business by the end of the week.

There was no public reaction by the House Democrats to the Senate offer Tuesday, and the closest thing to a comment was the general reaction to the forecast that came from Majority Leader Sullivan, D-Covington: “This is good news, of course.  It shows that our state’s economy is rebuilding and that consumers are starting to buy more products.

“But it certainly doesn’t solve all our budget problems. While it may move us closer to a short-term budget agreement, it doesn’t come anywhere near meeting our obligation to fully-fund basic education under the McCleary decision.

“We’ve been prevented from taking even small steps toward closing outdated tax exemptions and redirecting resources toward schools.  Even loophole closures requested by the affected industries, like the telecom fix, have been rejected.

“So, while today’s forecast may get us closer to a go-home budget, we can’t pretend we’ve solved the long-term problem.”

“I’m encouraged by the forecast and pleased the economy is gradually improving. Now is not the time to be making any rash decisions that would harm this recovery – and that includes elimination of tax incentives which keep people working and producing revenue. We need to do what we can to encourage this economy to create more private-sector jobs.

“Let’s also be clear: Just because the revenue projection is up doesn’t mean the Legislature should be trying to find more ways to spend it on new programs. Let’s take care of funding education first and then make sure we have a responsible reserve to be prepared for any further downturns in the state’s fragile economy.

“This bump in revenue weakens arguments for tax increases because an extra $2 billion is anticipated in the next budget cycle. Hopefully, this forecast will help break the logjam in budget negotiations and bring lawmakers closer together toward adopting a two-year operating budget – one that sets spending in line with projected revenue, and meets the educational requirements of the state Supreme Court’s McCleary Decision.”

And state Sen. Jim Hargrove, D-Hoquiam, representing the Senate Democrats, expressed a bit of weariness: “I guess the point is I want to get done. We have been here for six months working on this. It has been a grueling session and I think the citizens want us to get done, too, so I think it is time to wrap it up.”