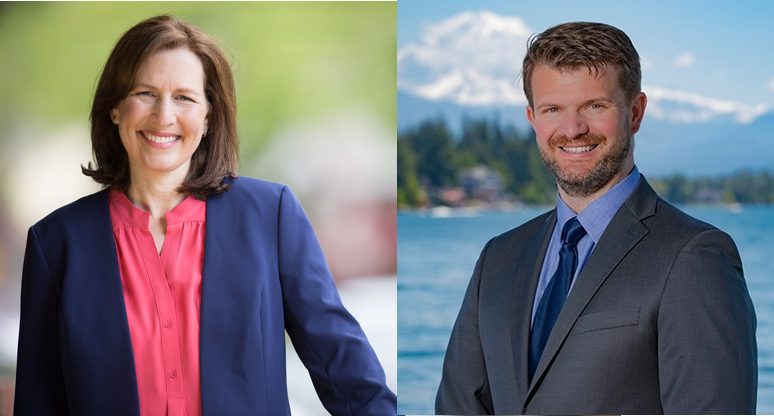 Early on in his congressional campaign, Jesse Jensen spoke over the phone with James Mattis, the Marine general, former defense secretary, and Washington native.

By Jensen’s account, General Mattis imparted to him the importance of making the middle bigger, not preserving the middle within its current parameters. The question then becomes, what is the middle? Moreover, how big should the middle get? How is the middle made bigger in the first place?

According to some analyses, political preferences are more divided along geographic lines than perhaps ever before; disproving the notion that there is one omnipresent, broadly-applicable middle. But if the middle can be localized, if the policy prescriptions of the middle need not apply to a national voting bloc, are its parameters more discernible?

Voters of the 8th Congressional District, which spans the eastern portions of King and Pierce counties past the Cascades into Chelan and Kittitas counties, will have a chance to answer these questions – as well as elections can answer questions like these – as they choose between two candidates in a collision course to define the 8th CD’s political middle.

In recent interviews with the Wire, both candidates agreed on one unremarkable point: The 8th Congressional District and Seattle do not share the same middle ground.

The 8th District is not Seattle. The 8th District is much more like a big swath of America, and I think it’s really important for us to not lose sight of where America is when we’re creating policy. There is a sensible, moderate middle ground where most people fall. I think we need to respect that and bring the public along with us. If we push too far, I think we end up scaring people.”

When asked to opine on the 8th District’s politics, Jensen characterized the electorate as independent-minded: “This is an incredibly independent, free-thinking district. It covers 7000 square miles, straddles the cascades, and there’s a host of varied issues that are important to voters in the 8th Congressional District.”

On the issues, Schrier’s record is more focused than varied. A pediatrician by trade, she seems to have selected her legislative priorities with surgical precision.

Zeroing in on health care during her first term, she sponsored a bill designed to speed up the production of generic drugs in order to bring down the cost of medications.

Another one of her bills set out that income falling under the “difficulty of care” exemption must be treated as compensation. The move addressed an element of tax code that made it difficult for home health care workers to participate in retirement plans – work that helped earn her the endorsement of the Alliance for Retired Americans.

While health care is a leading issue for voters no matter the region, Schrier discussed her work on the Agriculture Committee as a boon to the 8th District’s orchardists and wheat farmers . She introduced the Farmers Feeding Families Act with Rep. Cathy McMorris-Rogers to connect farmers, beset by pandemic induced closures, with local food banks. Her campaign also cites the Farm Workforce Modernization Act, introduced with Rep. Dan Newhouse and McMorris-Rogers, that makes reforms to the H2A worker visa program and creates a path to citizenship for farm workers.

For his part, Jensen concurred that orchardists and farmers would be top of mind for him.

One of the first things I’m going to do if elected is to work on a public-private partnership to increase the height of stampede pass. That will allow us to double stack shipping containers, which will do a host of things. It will ensure that our orchardists and farmers have access to crucial markets, and that they can get to the Northwest Seaport Alliance anytime of the year regardless of weather. It also reduces congestion on Interstate 90 as well as Western Washington by removing semi-trailers off the road, which takes hazardous material off the roadway and reduces pollution,” said Jensen.

We need to vehemently defend hydropower. The Rocky Reach dam and the Chelan Public Utility division in Central Washington produces over a million homes worth of power. And there’s only 50,000 folks in the valley. The rest of that can be sold up and down the western seaboard and it will reduce pollution.”

Apart from orchardists and farmers, Jensen’s background as an Army Ranger deployed on four combat tours could be helpful in the eastern portion of veteran-heavy Pierce County. After serving in the Army, Jensen went on to work as a program manager at Amazon and Microsoft.

Based on his four combat tours, Jensen said his candidacy represents “service and leadership,” while he called Schrier a “tax and spend Seattle-style progressive.”

This line of attack from Jensen – that Schrier is too far left for the 8th District – has been consistent throughout the campaign. In an interview with the Wire, he compared Schrier to Seattle Congresswoman Pramila Jayapal and criticized her for voting in lockstep with Nancy Pelosi.

According to govtrack’s 2019 Ideology Score – an annual report ordering all 435 House members from 1 (most conservative) to 435 (most liberal) – Schrier ranked 277. In this same report, Pramila Jayapal is ranked 422.

The chart below, updated to include bills Schrier has sponsored and cosponsored as recently as October 2nd, displays Schrier’s ideological position within the House as a whole.

Jensen also claims that Schrier is out of step with the 8th District on her signature issue: health care

She wants to go further than the Affordable Care Act at the cost of $30 trillion. That’s not an exaggeration. That’s the Congressional Budget Office estimate for the cost of Medicare for All or the Public Option that Congresswoman Schrier supports.”

Medicare for All and the Public Option are in fact two separate policies, not one in the same. Schrier’s campaign says she wants to “build on the ACA in the short term and implement a Medicare public option immediately, as we work toward a universal system.”

Based on Schrier’s record, some believe Jensen’s characterization of her as a Seattle-style progressive will not resonate with voters.

I think the primary results, which have incited all this handwringing, aren’t going to be reflective of the general. Schrier’s strength in 2018 was in the East King County suburbs, and those areas have moved even further away from the GOP since,” said Sam Jefferies, a political consultant and native of the 8th District. “They’re going to turn out in a big way for Biden/against Trump, and Jensen has given them no reason to split their tickets. If Dino Rossi, a known name and solidly country club Republican, couldn’t stem the bleeding in the burbs, there’s no way Jensen will, especially not enough to make up the 5 points Schrier won by in ’18.”

In the primary, the Republicans candidates combined for 49.2% to the Democrats’ 47.6%. Schrier won 43% while Jensen clinched the Republican nomination with 20%.

When Schrier captured her seat in 2018 – becoming the first Democrat to represent the 8th District since it was created – her opponent, Dino Rossi, was in a very similar position. Rossi captured the most votes in the primary, though he faced little Republican opposition and the Democratic candidates combined for a larger share of the vote.

But Schrier, who has raised $4.7 million this cycle, opted not to spend money on advertising ahead of the primary.

While Jensen’s fundraising has picked up since his primary victory, he is only sitting on about $193,000, according to the latest FEC figures.

While Democrats have signaled confidence that Schrier will turn out more Democratic voters in the general election, national players do not seem to be overlooking the race.

Last week, Barack Obama added Schrier to his second wave of 2020 endorsements. Meanwhile Richard Grenell, President Trump’s former Acting Director of National Intelligence and U.S. Ambassador to Germany, was in the 8th District this past weekend doorbelling for Jensen.

Jensen confirmed that he will be voting for President Trump, though he said as a member of Congress, he will support whoever the President is.

First and foremost, as a four term US Army Special Operations combat vet, I’m always going to support the commander-in-chief. That was true when I worked under President Obama, when I worked under President Bush, and it will be true under Donald Trump or Joe Biden….I’m a Republican nominee for a US House seat, I’m going to vote for the Republican nominee for President.”

Despite his support for the President, Jensen’s pledge to work in a bipartisan manor has earned him the support of moderate Republican organizations, such as the Mainstream Republicans of Washington (MRW).

MRW proudly endorses Jesse Jensen in the 8th Congressional District. He supports many of our values including support for sound fiscal policies that reduce regulatory burdens and lower the tax burden on the middle class,” said MRW President and Mayor of Marysville, Jon Nehring. “His candidacy is marked by solution-oriented thinking that supports more vocational training in our schools, stewardship of public lands, common sense solutions for reducing carbon that do not damage the economy, and support for law enforcement.”

Jefferies, the political consultant and 8th District native, maintains that moderate Republicans will not be so quick to ditch Schrier in an election cycle dominated by an unpopular President.

Moderate King County Republicans, and Republican-leaning independents, may be disenchanted by the actions of the state party in Olympia, and especially by events in Seattle, but they’re not about to run into the arms of a Trumpist Republican. Rural turnout, even if elevated, is not going to close the gap if suburban women stay willing to walk through broken glass to vote against Trump.”

While Schrier may be counting on the increased general election turnout, she said persuading moderates is still a component of her game plan.

I take faith in the fact that this district has not changed a ton in the last two years. It may feel like the country is a bit more antagonistic and divided right now. But the reality is that I was able to win in 2018 with over 52% of the vote, and I am so looking forward to being able to reintroduce myself to this district, to remind them that I went to work on things that matter to everyone regardless of your party like bringing down the cost of prescription drugs, making sure we have an economy that works everyone, keeping our children safe from gun violence. I followed through on those things, and hopefully that will win the day.”

In their endorsement of Schrier, the Seattle Times Editorial Board said she “has played a much-needed role counterbalancing the surge of the extreme left,” – a premise Schrier did not embrace when asked about.

I’ve never gone in with the intention of addressing another part of my party, because it is a big tent party. We share common values, but how we enact those values really changes…You don’t need to completely reconstruct the country in order to move us in the right direction. I think we all want things like universal coverage, affordable prescription drugs, taking our Democracy back from the special interests and giving it to the people. If we can just be where the country is, I think our politics will work better and I think our country will be less filled with animosity.”

The question remains, how do voters define the middle in Washington’s 8th Congressional District?