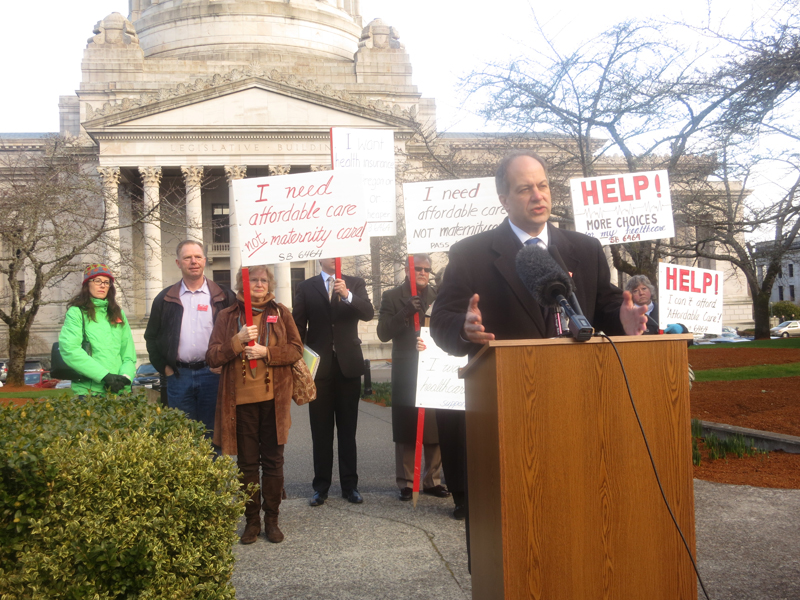 A Health-Insurance Showdown – House Republicans, Senate Majority Push Bill That Would Allow Less-Expensive Policies to be Sold Across State Lines 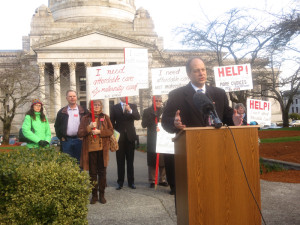 OLYMPIA, Feb. 5.—Looks like an Obamacare showdown is coming in the state Legislature, as mass cancellations of policies and staggering increases in premiums have Washington lawmakers looking longingly at the far-cheaper insurance plans being offered in other states.

House Republicans and members of the Majority Coalition in the Senate are pushing a bill that would do an end-run around the state insurance commissioner’s office – allowing out-of-state insurance companies to offer their less-expensive policies in Washington. They wouldn’t be subject to Washington rules that are at least partially responsible for this state’s dramatically higher premiums. Democratic Insurance Commissioner Mike Kreidler – the man who makes the rules — is urging lawmakers to hold the line. In the weeks that remain of the current legislative session, the big question is whether public anger over the high cost of insurance will overcome political resistance and force the Legislature to take notice.

The proposal could cut hundreds of dollars from the monthly premiums Washington residents are required to pay for health-insurance policies on the individual market, said sponsor Sen. Steve O’Ban, R-Lakewood. Washington residents who have found themselves hit with dramatic premium increases have no other recourse, he said. “The premiums are horrendous and they cannot afford it. It is a choice between their mortgage payment or health insurance, and I want to provide them more options.”

Horror stories abounded as the measure got its first hearing in the Senate Tuesday – about insurance premiums that skyrocketed last month when the Affordable Care Act took effect, doubling in some cases and hammering the very people the new health insurance law was supposed to help. One provision of Senate Bill 6464 may not be entirely practical – it would allow Washington insurance companies to offer older, skimpier plans from 2013, without interference from the insurance commissioner. For that to happen, Washington-based insurers would have to rebuild old provider networks and relaunch the lengthy rate-filing process, a prospect that leaves them with little enthusiasm. The other element poses a more direct challenge to Kreidler. The measure would allow insurance companies from beyond the state’s borders to offer plans on the individual market that would be regulated by other states, not this one.

The state’s health-insurance companies and the insurance commissioner’s office are not amused. 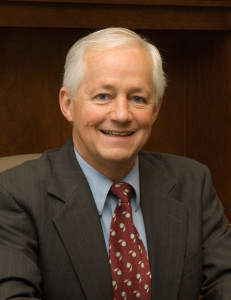 The measure takes dead aim at the issue that caused so much heartburn for the Obama Administration last fall – the president’s oft-repeated promise that “if you like your insurance plan, you can keep it.” Some 4.7 million Americans found out otherwise last fall, when new coverage requirements under the Affordable Care Act prompted insurance carriers to drop old policies and create new ones, generally with higher premiums or bigger deductibles. In Washington, some 290,000 customers lost their coverage and were required to seek new insurance.

Public furor prompted the president to relent last November. Obama declared that states could allow insurance carriers to offer their old policies for another year. But in this state, Kreidler immediately declared that it was too late to unring the bell – the state and its insurance companies had already gone too far in creating new policies that fully complied with the Affordable Care Act. In that he had support from insurers.

The upshot? Thousands of Washington residents not only lost their old coverage, they found that new policies were dramatically more expensive. One 64-year-old customer saw his premium rise from $726 a month to $1,406, Bellevue insurance broker Gary Franke told the Senate Health Care Committee Tuesday. Coverage was a little better, Franke said, but the $680-a-month hit left him reeling. One family saw its premium rise from $911 to $1,473.  Franke’s father saw his cost rise from $458 to $620. High deductibles for the cheapest plans, as much as $5,250, require purchasers to go deep into their own pockets before insurance kicks in. 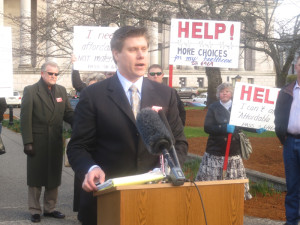 In other states, where insurance regulators didn’t take such a hard line, less-comprehensive policies written under last year’s rules are being offered at substantially lower cost, Franke said. And even where the same rules apply, there are big differences. Virtually identical policies in Oregon cost about 15 percent less; in Idaho, somewhat different policies are on average 29 percent less, he said.

The people who have been hit the hardest are those who make just a tad more than the federal income guidelines that would qualify them for subsidies, he said. For an individual, the cutoff is $45,960; for a family of four, it is $94,200. Because those customers don’t get tax credits, they have no reason to purchase through the Washington health benefits exchange. For them, Franke said, it would make sense to buy policies outside the exchange from out-of-state companies at lower cost.

The middle class is being hammered, he said. Lower-income people qualify for subsidies. Upper-income people can afford $1,500-a-month premiums. But those in the middle are in a state of shock. “The Affordable Care Act does have some benefits, but the negatives significantly outweigh those. I see it on a daily basis. I hear my clients crying on the phone. It is one of those issues – what do we do? This is something that is going to hurt the economy significantly more than it is going to help it, and it is going to take us up to a year to find out.” 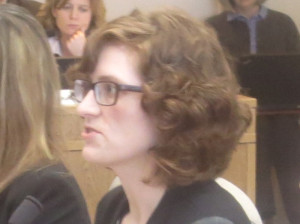 Holly Mortlock of the state Office of Insurance Commissioner.

The counterargument from the commissioner’s office appears to be local control. If out-of-state companies are allowed to offer policies in Washington, the state won’t be able to impose its own rules for consumer protection and benefits coverage. “The bill would significantly compromise our ability to enforce the standards the Legislature has set for the health and well-being of Washington residents,” said Holly Mortlock of the Office of Insurance Commissioner.

That’s part of the idea, of course. But the insurance commissioner’s office maintains those out-of-state carriers would provide unfair competition for the state’s own insurance companies. The idea that Washington-state insurance companies would be able to meet them head-on by drafting new policies under the old rules is a non-starter because of the “extraordinarily difficult” process that would be involved, Mortlock said. Those less-expensive policies exclude coverages that make for “meaningful insurance,” she said – costly items as maternity care and brand-name prescription drugs. And if those less-expensive policies reappeared on the market, she said they would siphon customers away from the higher-cost policies now being offered. If the “young invincibles” aren’t forced to buy those more-expensive policies, that could drive up premiums for everyone else. “Reinstatement of old plans that do not meet the standards of the Affordable Care Act would cause market instability over the next few years, posing the risk of higher premiums,” she said.

Allowing out-of-state competitors to offer policies like those “would unfairly punish our current carriers who are authorized to sell insurance in our state today,” she said. The state’s health-insurance companies agree. “This bill would place domestic carriers in this state at a distinct disadvantage because out-of-state carriers would come in and sell those products without meeting Washington regulations or consumer protections,” argued Sydney Zvara of the Association of Washington Health Care Plans. 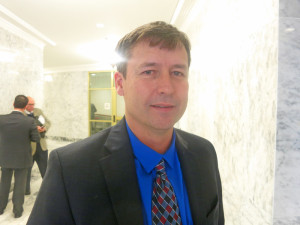 The Democratic insurance commissioner is sure to find a few more sympathetic ears in the Democrat-controlled House than he is in the Senate. But in the upper chamber, under the control of a largely Republican majority coalition, the sympathy seems to be more with the people who pay the insurance bills. “I want to make sure I am understanding this correctly,” said state Sen. Bruce Dammeier, R-Puyallup. “The insurance commissioner chooses to deny Washington citizens options, based on rules that the federal government is allowing, thus driving up our cost, reducing our choice. And then it wants to testify against a bill that would give our citizens more choice on the grounds that the artificially inflated Washington market would be disadvantaged by it? Is that what I’m hearing?”

To drive the point home, Republican lawmakers solicited tales of woe with a Facebook page they have titled “Obamacare Nightmare.” They didn’t have any trouble finding them. Bill Chandler, a professor at Central Washington University told the Senate Health Care Committee his premium has doubled from $300 to $600 a month, with a deductible that doubles the cost before he sees any benefit. Health care costs now will swallow 25 percent of his aftertax income. “That is why I am here,” he said. “We all got duped. We voted for something that was going to be affordable and provide great care, and it is just not that way. We need to do something so that the citizens of Washington state can survive.”

Insurance broker Heidi Erickson of Federal Way said she paid $321 a month last year; this year the only insurance she can afford is $487. Between the higher premium and the deductible, she has to spend $12,000 before she has any coverage at all. “To me that is not a catastrophic plan; that is simply not insurance. So I’ve opted not to buy it, until there is perhaps another option.”

There are a few unanswered questions about the plan. If Washington opens the door to out-of-state companies, will they come? Will they be able to beat the current premiums, and by how much? At Tuesday’s hearing, brokers, insurers and regulators were unable to explain how much of tghe state’s higher premiums are attributable to state rules and how much to the cost of doing business in Washington. No representatives of out-of-state insurers testified before the committee. But state Rep. Matt Manweller, R-Ellensburg, who introduced the original version of the bill in the House, said he’s betting on the free market. “You have thousands of customers. The latest figures suggest there are 290,000 customers in this state who have been thrown off their insurance plans alone. I think that if they were able to sell to those people, any smart businessman would say, we’ve got 290,000 potential customers there – let’s go get them.”