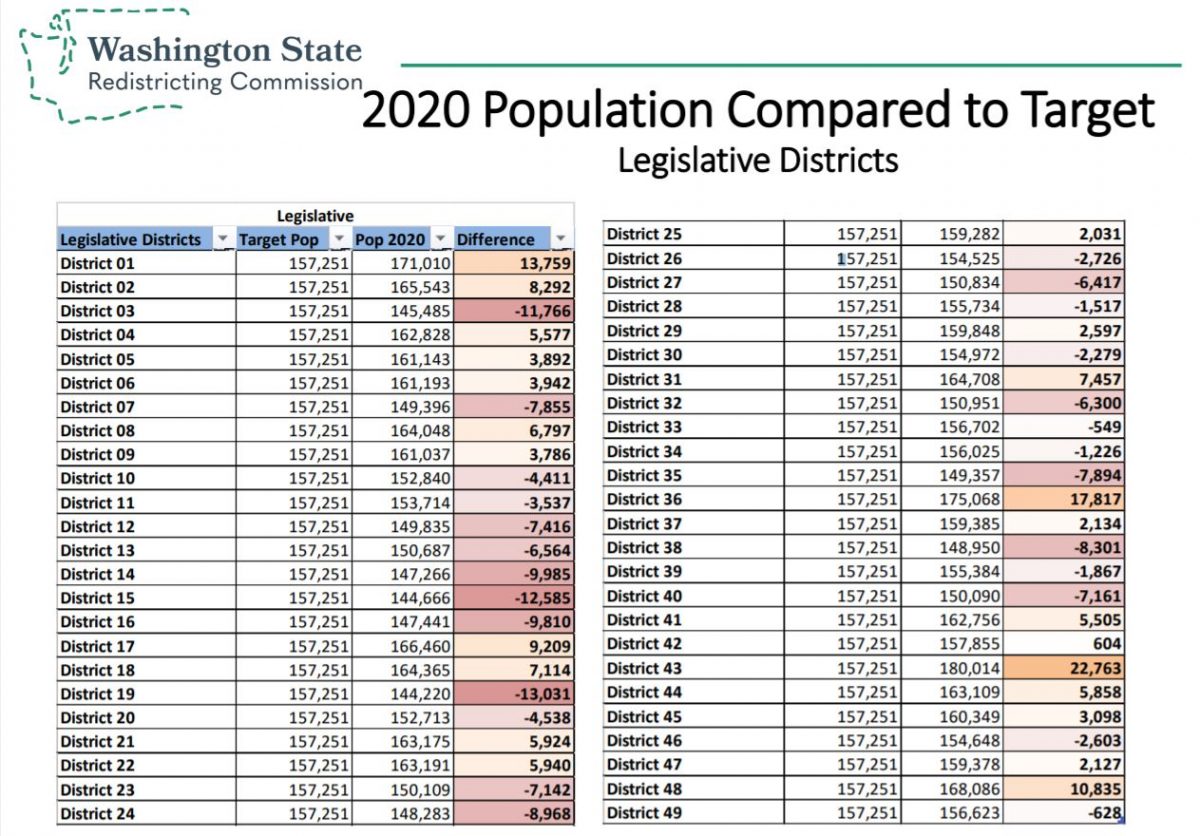 A few thoughts on the census data by LD

The Washington State Re-Districting Commission released census data by legislative district during its August 16th meeting. This was drawn from data provided by the US Census as part of its once-every-ten years population count.

Lisa McLean is the Executive Director of the Commission. She highlighted the specific districts that needed the greatest adjustment.

A key thing to look at in trying to predict some significant shift in LD partisan support is the differential in partisan performance across LD lines.

By comparison, the 3rd and 24th are two Democratic districts which need to pick up more voters who will likely come from more Republican areas than the districts themselves. The 3rd elected three legislative Democrats by an average of 21 points in 2020. It will need to pick up voters from the 4th and/or 6th, both now represented by Republicans.

It’s possible that the 3rd will become more Republican as a result. However, a shift of 20 points is unlikely. The 3rd will remain reliably safe for Democrats.

However, if the 3rd takes too many voters from its border with the 6th LD, many of whom are probably more progressive than the 6th district mean, it’s possible that reduction in Democratic votes could move the swing 6th district into the reliably red column.

In other words, the 3rd district’s need for voters may reduce the opportunity for Democrats in the 6th.

The 24th poses a problem for Democrats as well. It’s a 53% Democratic district that is surrounded by other districts that need to add voters, too. The 40th and the 10th both need voters, so the 24th is not likely to get votes from those geographically distinct regions to its northwest.

The 23rd, 35th and 19th all need votes too. The 23rd and 35th are likely to gravitate towards Tacoma and Puget Sound to get those. So, the 24th is likely to pick up those conservative areas these districts leave behind in places like Mason County.

Those new voters are likely to be more Republican than the mean in the 24th, meaning it will likely put significant partisan pressure on a district that is about 54% Democratic.

If Democrats were to lose the 24th, it would mean the last significantly rural district would be gone to Democrats, now that all of Eastern Washington (outside the 3rd) has reliably moved to Republicans.

It will also be worth watching the Yakima area come September when the first draft maps are released. That region was bi-sected in the last re-districting, in part, to mitigate Democratic performance in the region.

However, all of the districts in the region need to add voters. Each of those districts, particularly the 14th, 15th, and 16th, will likely need to pick up more geography from their western borders, though the 16th may take some from the 8th near Tri-Cities.

The question for the Yakima region is whether the town will get its own representation or whether it will remain divided. (The answer is that it will likely remain divided so that Republicans can keep a hold of the region without a new island of blue.)

In Puget Sound, almost all of the districts need to get smaller because of greater population growth. The 32nd, 11th, and 46th are notable exceptions, though those won’t have much partisan impact.

Where the impact will be felt is on the eastside. Some will remember when the 45th, 48th, and 41st were swing districts. That hasn’t been the case for years, but that was the case in recent years in the 5th out in the North Bend area.

These numbers suggest the 5th will be solidly Democratic in future years, just like its other eastside neighbors, as its geographic center will need to move significantly westward as a result of compressing Puget Sound districts on its western flank. This compression will draw the 5th towards Puget Sound, forcing it to let go of more conservative votes on the east side of the district.

The 31st could be an interesting district to watch. It’s a 60%+ Republican district at present based in east Pierce County. But it’s going to have to give up 7,000 voters, getting smaller. And, it’s probably going to to have to move significantly westward given the likely vacuum from shrinking districts on its western edge. It’s possible in 10 years time, we’ll talk about the 31st like we talk about the 5th today: a former Republican bastion that was done in by the demographic influx into central Puget Sound.

Now all of this still needs to be hashed out at the Commission. But, if demography is destiny, it looks like some of these districts may be destined for some changes.