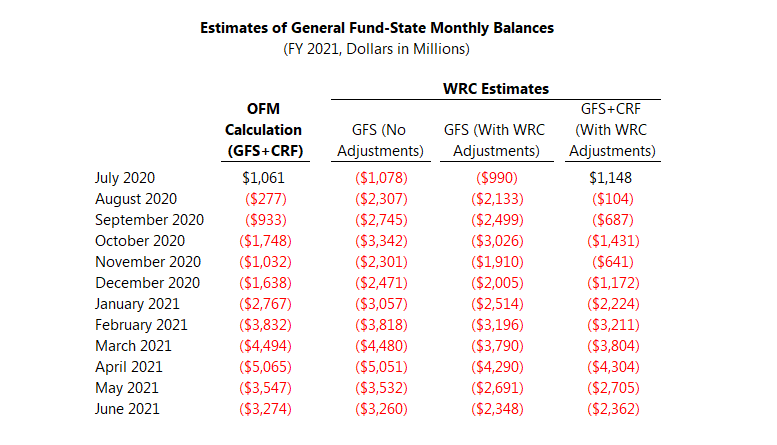 A cash deficit in the GFS is expected this month; could mean double-digit across-the-board cuts

The Office of Financial Management (OFM) estimates that the general fund–state (GFS) will be in cash deficit this month. Jason Mercier of the Washington Policy Center first posted OFM’s calculations earlier this week.

According to OFM, the cash balance of the GFS will be negative $277.1 million this month and the deficit will continue to grow through the end of FY 2021. Whether or not the GFS is in a cash deficit matters because state law (RCW 43.88.110(7)) requires the governor to make across-the-board cuts to spending allotments if a cash deficit is projected in a particular fund. (Terms are defined here.)

The OFM estimate assumes that the state’s unspent balance from the coronavirus relief fund (federal dollars that must generally be used only for new spending related to coronavirus response) will be used in lieu of state spending, thereby generating a positive cash balance for July 2020 and reducing the size of the deficits going forward. A few points about this:

OFM’s calculation does not adjust GFS spending to account for savings from the state employee furloughs, the hiring and purchases freeze, the enhanced federal Medicaid match, or “general agency savings.” These items would reduce the deficits, but they wouldn’t make a material difference.

In the table below, I made some of these adjustments. The first column presents the OFM calculation (including the CRF). The second column shows the monthly GFS deficits without the CRF or any other adjustments. The third column adjusts the numbers to account for the furloughs, the enhanced Medicaid match, the July revenue collections report, and the June caseload forecast. (These are the adjustments we made in a recent policy brief showing how deep cuts to the funds subject to the outlook would need to be, depending on when the Legislature acts. There have been no public estimates of how much the hiring and purchases freeze will save, and I’m not sure what “general agency savings” OFM is referring to.) The fourth column makes these adjustments and includes the CRF.

Without the CRF, the GFS was in cash deficit in July. Even with the most generous assumptions, the GFS will face a deficit in August. As stated above, that should trigger RCW 43.88.110(7) directing the governor to make across the board cuts.

In 2010, as we wrote in our report on budgeting in the Great Recession, former Gov. Gregoire implemented across-the-board cuts due to a cash deficit in the GFS. Her order of Sept. 13, 2010 directed cuts effective Oct. 1, 2010, based on the September 2010 revenue forecast. A memo from the Office of Financial Management on Sept. 16, 2010 said that the cuts would be 6.287 percent.

Across-the-board reductions are a blunt instrument. As the director of OFM wrote in 2010, the governor

does not have the discretion to alter the percentage reduction to be applied to the various allotments. The requirement that the reductions be made across-the-board is rooted in the constitutional separation of powers doctrine. Courts have held that it would be an unlawful delegation of legislative power if the Governor were allowed to make policy decisions about the relative importance of programs and activities that differ from those reflected in the budget enacted by the Legislature. The overall purpose of the statute authorizing uniform reductions in allotments is to preserve the priorities established by the Legislature. The reductions must preserve the array of priorities and apportionment of the funds in the Legislature’s budget, until and unless the Legislature amends the budget.

(Indeed, after Gov. Gregoire made the across-the-board cuts in Sept. 2010, the Legislature went into special session that December to pass a supplemental budget that reduced spending.)

It appears that any across-the-board cuts this year will have to be deeper than those made in 2010. In ordering the 2010 across-the-board cuts, Gov. Gregoire protected basic education, debt service, and contributions to retirement (citing constitutional obligations for these programs).

If these areas are protected, I estimate that the cuts to the rest of the budget would need to be 33.5 percent given OFM’s calculation of the deficit (including the CRF, which, as noted above, has a number of issues), assuming the cuts would be effective in September. Using the deficit calculation that includes the CRF and our other adjustments, the cuts would need to be 24.2 percent.

At this point, Gov. Inslee has not indicated that he will order across-the-board cuts in response to the cash deficits projected by OFM. Moreover, there are no plans for a special legislative session to deal with the budget shortfall. By waiting, any necessary spending cuts will have to be even deeper. Additionally, the governor cannot unilaterally use the rainy day funds to soften the blow of the spending cuts. To access those funds (currently $1.693 billion, according to OFM), the Legislature will have to go into session and appropriate them.