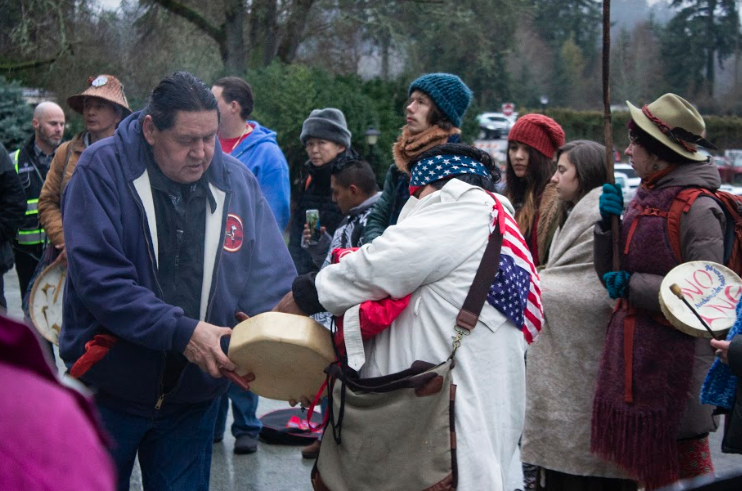 Groups of demonstrators rallying in support of farming and environmental sustainability gathered outside the state capitol building just before the state’s House Democratic and Republican caucuses met in their respective meetings kicking off the 2020 legislative session Monday.

Protectors of the Salish Sea, a group of indigenous peoples, started the day trying to incite Governor Jay Inslee to declare a climate emergency, with one rally organizer saying he believes climate change to be the most existential issue of our time.

“Jay Inslee gives words about climate change,” said Paul Chiyokten Wagner, a member of the Saanich tribe. “The boldest thing Jay Inslee has for the 2020 legislation is to plant trees. He thinks he can sequester his way out of a global climate emergency.”

While Inslee had the most progressive environmental policy proposals during his presidential run, Chiyokten Wagner doesn’t see that same bold vision translated into the governor’s third run for the seat.

Chiyokten Wagner pointed to numbers released by BioScience, a scientific publication that recently released figures stating that more than 11,000 scientists declared a climate emergency. The study was picked by a number of national news publications. Chiyokten Wagner also pointed to more regional impacts, like the loss of glaciers in the Olympic Mountains. According to the National Park Service, Olympic National Park had 266 glaciers in 1982, which declined to 184 in 2009. Researchers to compare images of the mountains between the 1970s and the 1990s came to the conclusion that a 34 percent loss of glacier surface area occurred in a 30-year span. Members of Protectors of the Salish Sea want to see the legislature take action to stop such effects.
“It’s undeniable we’re in a climate emergency,” Chiyokten Wagner said. “We’re asking them to declare that [a climate emergency] as soon as possible.”

Shortly after the Protectors of the Salish Sea started their demonstration, a group of farmers took to the capitol steps in support of the King-Pierce County Farm Bureau to remind state legislators know that farmers are still here, despite what some farmers called a tough 2019 legislative session.

“We thought we’d come out and remind everybody that agriculture is important to Washington State’s economy and don’t forget about us,” said Rosella Mosby, President of the King-Pierce Farm Bureau. “We’re protesting anything that costs farmers more money to produce their product. It’s becoming harder and harder and we’re getting squeezed.”

The bureau had a message just as clear to the public as to those in power on Monday. Voters, Mosby said, should look at each candidate’s agricultural policies to see how they would support local farmers.

“Check out how their candidate supports agriculture,” Mosby said. “I think we’ve forgotten to have that part of the conversation. We don’t always talk about agriculture and we don’t want to be mitigating our food system.”