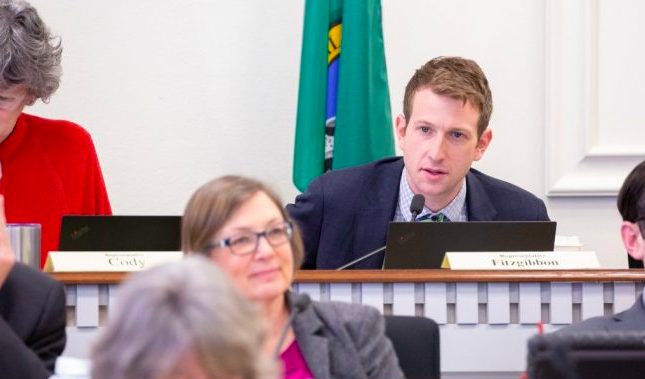 Rep. Joe Fitzgibbon (D – Seattle) has been working to get a clean fuel standard across the finish line in the Legislature for years. He got one big step closer last week as the Senate passed HB 1091, of which he is the prime sponsor. The bill now heads back to House, where it remains to be seen whether Democrats can agree on a final version before the clocks runs out in two weeks.

Heading to the House alongside HB 1091 is SB 5126 – Sen. Reuven Carlye’s (D – Seattle) cap-and-trade bill. As Chair of the Environment & Energy Committee, Fitzgibbon will play a leading role bringing members up to speed on both bills as they currently look, asking and answering policy questions that remain, and building consensus. I spoke to him recently to hear about the loose ends he’s seeking to tie up in both bills, as well as the dynamics that made Senate passage possible this session.

Michael Goldberg: Beginning with SB 5126, three Senate Democrats voted against it. How confident are you that you’ll be able to secure the votes you need and what type of work will you be doing to shore up support?

Rep. Joe Fitzgibbon: We’re not expecting any Republican support and we have 57 House Democrats. I think we have a whole lot of work to do in an incredibly short amount of time to bring our members up to speed on this bill – how it works, how it supports climate action, how it supports investments in communities, how it supports reducing environmental health disparities. I don’t take that lightly.

It’s going to be a very arduous couple weeks bringing our members up to speed and seeing what priorities they want to see reflected in the bill. A lot of the strongest concerns about the program are from the progressive side, so I would expect that there would need to be a lot of attention to environmental justice concerns in the House in order for us to get 50 votes.”

MG: The Speaker said it would be challenging to bring members up to a speed on a bill like this under the time constraints that exist. How do you do that? Is it just internal conversations with your colleagues, or is it bringing in external influence and support? What does that process look like – of bringing colleagues up to speed?

JF: I think it’s just a lot of conversations. We’ll be having a hearing on the bill next Wednesday, so that’s a chance for members of my committee to get more familiar with it. Some members may be familiar with cap and trade as a mechanism from 2015 when we had a bill before us on the topic, but of course we have a lot of new members since then.

I think there will be a lot of one-on-one and small group conversations. Given the amount of time we have left, I don’t think there’s time to bring in a lot of outside opinions to educate members and get done everything we need to get done over the next two weeks. I think it’s possible that they’re going to be excited about voting for it, but we don’t take that for granted.”

JF: One is the question of what kind of transportation projects do the carbon revenue dollars support. I think a lot of House members are going to want to see those dollars focused on transportation investments that reduce greenhouse gas emissions, rather than just open-ended. I hope that is one way we can start to address some of the environmental justice concerns.

There’s an air quality monitoring program in SB 5126, and I think members need to understand how that will work and impact their communities. I have not talked to Senator Nobles to hear exactly what changes she wants to see but in general, I think our members would like to see not quite as all-encompassing of a focus on transportation. To the degree those dollars are going to transportation, I think they would like to see how many of those dollars are going to things like transit, bike pedestrian infrastructure, and things that reduce our emissions further.”

MG: As you know, there is an alternative floating around, Senate Bill 5373, which was sponsored by Senator Lovelett who voted against SB 5126. From your perspective, where does that proposal come up short and how much does it complicate matters to have that Democratic alternative out there floating around?

Pretty much all the differences stem from that. But the fundamental goals of requiring fossil fuel pollution to pay more of its own way, increasing the price of fossil fuel pollution, investing those proceeds in clean energy transition and mitigation to low income households; those are consistent across the programs.

I think as members understand the ways that the two different concepts are similar, that increases their comfort level with both. That’s not to say people aren’t very passionate about Washington Strong. I’m working to make that an advantage to drive the conversation forward on carbon pricing, rather than have people entrench themselves into one pathway versus the other.”

MG: On the law carbon fuel standard, what are the major sticking points that legislators need to hash out if a final version is to be adopted before the end of the session?

JF: I think some of the provisions the Senate adopted – such as requiring certain amounts of fuel production be reached in order for the standard to continue to be implemented – I think those create a possible chicken and egg problem that we need to resolve. Investors are not going to want to invest in a facility if they’re not sure of the policy certainty that the program will be continuing into the future.

I think there are other great ways we can support in-state feedstock production. But the real, prescriptive benchmarks the programs need to achieve in order to take effect; those are problematic for me. I think they’re also questionable from an interstate commerce, constitutional standpoint.

I think our members are a little uneasy about the provision limiting the implementation of the bill to just 10% carbon intensity production. I think our members would like to go further than 10% and to match the 20% that we’ve passed the last two years.

I would prefer these things to stand on their own merits and not be linked. But if they’re going to be linked, are we sure that is going to make it more likely that a transportation package passes, or does that just create more excuses for certain industries or certain legislators to oppose a future transportation package? I think those are political questions we need to revolve before passing a clean fuel standard into law.”

MG: Republicans say a clean fuel standard is actually very regressive, that it would fall hardest on lower income people who live further away from their jobs. Why are they wrong?

JF: The impacts of climate change are more regressive than anything. The impact of air quality on human health. The impacts of sending the many billions of dollars we send out of the state every year to jurisdictions that sell us petroleum. If you look at the economic development opportunities if, rather than sending those billions of dollars to Alberta and North Dakota, they were instead going to the Olympic Peninsula or canola seed from Moses Lake. The lack of job opportunities in rural areas is extremely aggressive.

MG: Just zooming out a bit, Democrats have been pushing these climate policy items for years. Are there any particular factors you can name that made this session the year when Senate passage became a reality?

JF: I think it was a function of a lot of work by a whole bunch of stakeholders and by legislators, including Senator Carlye. I think it was impactful that you saw more businesses that would be covered entities under the bill – like Puget Sound Energy, BP, and Shell – move to places of neutrality.

I also think the election results turned out more supporters of climate action in the Legislature. It’s no accident that cap and invest passed by one vote and Senator Nobles voted for it. Senator Takko would not have voted for it. Having that change in where the center of gravity lies in the Democratic majority was clearly a factor. But as time goes by and people start experiencing the impacts of climate change more and more, there is more urgency among people that this has to get done. I find that to be long overdue, but better late than never.”

MG: Finally, former California Governor Arnold Schwarzenegger congratulated you after the clean fuel standard passed. What has your relationship with him been like as you’ve worked on this policy over the years?

JF: He has an institute at the University of Southern California that works on climate policy and the clean fuel standard was one of the aspects of his legacy that he’s most proud of. Former Senator Fran Pavley – who was the prime sponsor of California’s cornerstone climate law (AB 32) back in 2006 – she runs the shop there and has been supportive of our work in terms of providing connections to biofuels businesses, policy resources, and analysts. The institute has also helped amplify our message, best typified by Governor Schwarzenegger’s tweets.

This conversation was lightly edited for clarity and length.