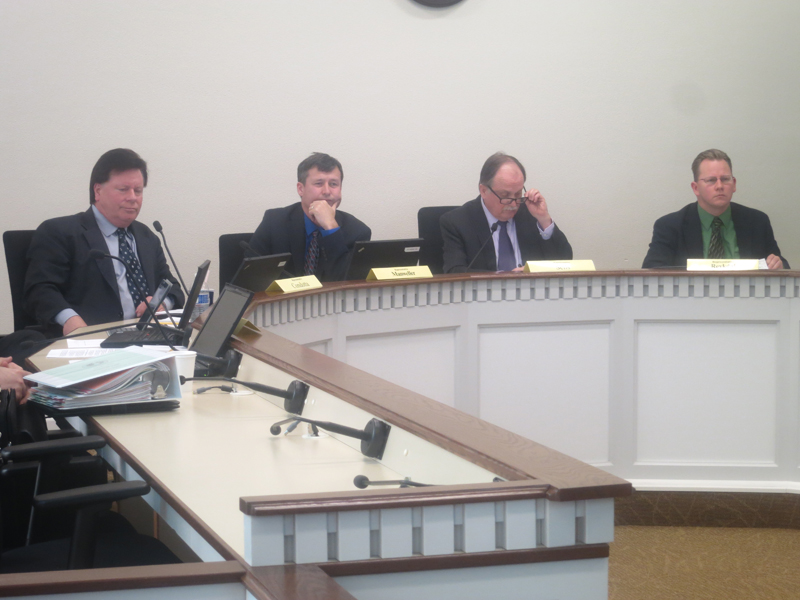 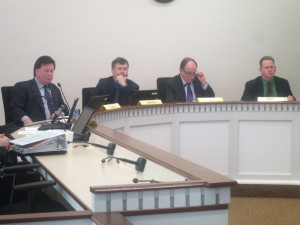 OLYMPIA, Feb. 5.—A much-touted measure that would boost Washington’s minimum wage, already highest in the country, to $12 an hour got its inevitable hearing in the state House Tuesday – and all the familiar arguments were sounded. From its progressive advocates came a pitch for a “living wage,” and from business dark predictions of death for jobs.

Not that anything said Tuesday is likely to make any difference. The measure is set for a vote in the House Labor and Workforce Development Committee today and the decision appears a foregone conclusion. All Democratic members of the committee have already signed on as sponsors of the bill – enough to assure its passage over stiff opposition from Republican members. The real showdown will take place later in the House Democratic Caucus room, when leaders begin counting votes.

House Bill 2672, backed by labor unions and activist groups, would boost the state minimum wage from $9.32 an hour in stages to $12 by 2017. Thrust into the spotlight by last November’s vote in the city of SeaTac for a $15 minimum wage in airport-related businesses, and now the subject of deliberations before the Seattle city council, an increase in the minimum wage has become a rallying cry for progressive groups in their campaign against “income inequality.” It might seem a bit incongruous for a state that already beats most others by $2 an hour, but it does go to show that Washington is fertile ground. Said sponsor Jessyn Farrell, D-Seattle, “In Washington state and across the United States, income inequality is at its most stark in three generations, since my grandmother was a little girl at the onset of the Great Depression, and it is at its most extreme.”

Which brought a jab from state Rep. Matt Manweller, R-Ellensburg. If a high minimum wage reduces income inequality, and Washington already has the highest minimum wage in the country, then why doesn’t Washington have the narrowest gap between rich and poor? For the record, Washington ranks 16th, according to U.S. Census Bureau data.

“That is a good question,” Farrell allowed, “and perhaps there is someone who has those details.” It was that kind of hearing. Facts, figures and more than a few assertions ran thick through the room. 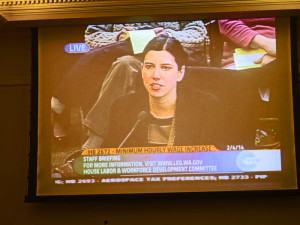 The view from the overflow room: Sponsor Jessyn Farrell, D-Seattle, makes her pitch.

There were statistics galore, but the one that counts most is the number of cosponsors on the bill. Two weeks after the bill was dropped no new members have signed on – the number of backers remains stuck at 32. All are members of the House Democratic Caucus, and nearly all of them from safe Democratic districts in the urban Puget Sound area. It takes 50 votes to pass a bill in the House. The big question is whether 18 more Democrats can be found who will be willing to take a vote that will antagonize the small businesses in their districts that ultimately will have to pay the bill.

House Majority Leader Pat Sullivan, D-Covington, warned reporters Monday not to read too much into the fact that the bill does not at this point appear to have sufficient support for passage. “Never judge a bill by the number of sponsors,” he said. Should the measure win passage in the House, however, it appears likely to go no further in the Senate. Commerce and Labor Chair Janea Holmquist Newbry, R-Moses Lake, promises a hearing, if only to demonstrate the impact on business and job creation.

At Tuesday’s hearing, James Fricke, owner of Capital Aeroporter, an Olympia shuttle service, said the wage hike would force him to raise prices beyond what the market will bear. Add it to everything else lawmakers are considering this session – paid sick-leave, mandatory vacation leave – “if you stack them all up, we will be out of business and the jobs will be gone, and the people we employ will be looking for work.” 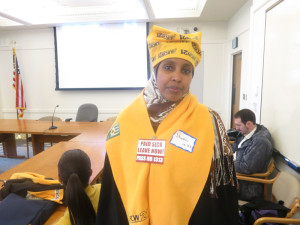 Advocates Tuesday advanced largely philosophical arguments for the measure. Members of the United Food and Commercial Workers union packed the hearing room and spilled into an overflow room in the John Cherberg Building next door. “I cannot express to you how frustrating it is to work at a job that is often stressful and physically demanding, to work as many hours as your boss will give you, and still not make enough to make ends meet,” said UFCW member Bruce Le, a retail worker at Fred Meyer. “That is the reality for retail workers across Washington, as well as in many other industries.”

Zack Silk made an appearance on behalf of Nick Hanauer, the Seattle venture capitalist who keynoted the national campaign for a $15 minimum wage last spring with a widely read opinion piece on the Bloomberg News Service. “A fundamental law of capitalism is that if workers have no money, then businesses have no customers. That is why the widening wealth gap that is in the economy right now is not just a moral challenge but an economic challenge. In a capitalist system rising inequality creates a death spiral of falling demand that eventually takes all of us down. Low-wage jobs are the fastest-growing jobs in the economy, and by some estimates nearly 50 percent of jobs will be low-wage service jobs by 2020. The most powerful thing we can do to address this is to increase wages, and that is by dramatically raising the minimum wage.”

Wall Street greed and rapacious corporations earned the expected mentions. There was talk of McDonald’s, whose workers earn $1.3 billion, and who collect the same amount in public benefits. Said state Rep. Ruth Kagi, D-Seattle, “From my point of view, taxpayers are subsidizing these minimum wage workers now, because we are having to pay for things like food stamps and housing subsidies.”

Business Calls it a Job-Killer 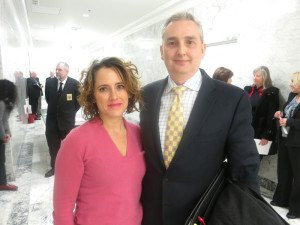 Erin Shannon of the Washington Policy Center and Patrick Connor of the National Federation of Independent Business.

From business came a rather less airy view. The thing you have to remember is that Wall Street doesn’t have much to do with Main Street, argued Patrick Connor of the National Federation of Independent Business. It is small business that creates most minimum wage jobs, and a $5600 increase for every full-time-equivalent worker has to come from someone’s pocket. The result most likely will be higher wages for fewer workers, he said.

On this one there were numbers to back up the assertion. The Washington Restaurant Association observes that the typical restaurant in Washington operates with three fewer employees than in other states. Chalk it up to the high minimum wage and the fact that Washington does not offer a “tip credit” to offset wages, as is permitted in 43 other states, said the organization’s Bruce Beckett. “There are thousands fewer jobs in the state because of our current policies, and it particularly hurts youth in their first employment.” Teen summer employment in the industry has fallen by 15,000 since 2001, he said; raise the wage and you further exacerbate the problem.

Currently about 3 percent of the state’s workforce, some 67,000, earns the minimum wage, according to the Department of Employment Security; the increase, however, would affect the half-million or so who make $12 or less. A report issued this week by the Washington Research Council indicates that the minimum wage increase would hit hardest in the restaurant and hotel business, retail trades and agriculture.

Other statistics challenge the case that workers can’t get by. The average minimum wage earner isn’t a single mom or dad working two or three jobs to make ends meet, said Erin Shannon of the Washington Policy Center. Some 42 percent live with their family or with a relative; 31 percent are married or single with no kids. The average family income of a minimum-wage earner in Washington is $47,540. “When you force an employer to give a raise, it hurts the very people the minimum wage is trying to help, those with little or no skills,” she said. “When government increases the cost of labor an employer is going to react by trying to reduce costs.”

Kris Tefft of the Association of Washington Business noted that the state already more than keeps pace with inflation, the result of a 1998 initiative that indexes minimum-wage increases to the cost of living for urban wage earners – essentially pegging the state to the fast-rising consumer price index in Seattle. Meanwhile Washington ranks eighth in median household income. Ending income inequality is a fine idea, he said, but somebody has to pay for it; if lawmakers want to boost employment, perhaps it makes more sense for them to consider the strength of the general business climate. “We think proposals like this address symptoms rather than causes,” he said.